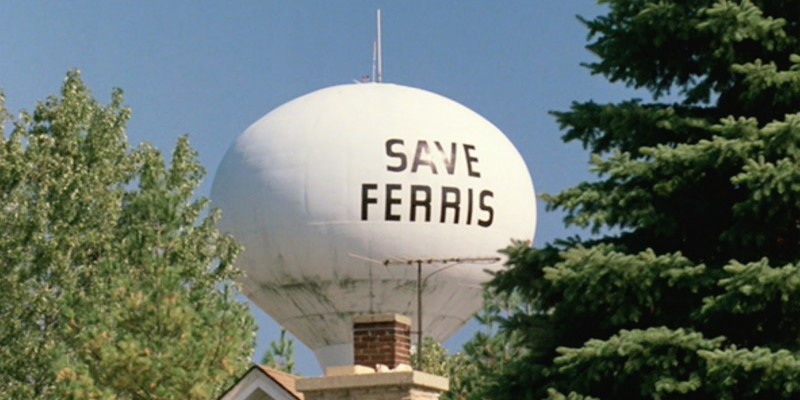 From the Saturday, June 11, editions of The Daily Journal (Kankakee, Ill.) and The Times (Ottawa, Ill.) …

“Life moves pretty fast. If you don’t stop and look around once in a while, you could miss it.”
— Ferris Bueller

Three decades ago today, a trio of truants from the town of Shermer, Ill., redefined cool, comedy and teenage angst for an entire generation by embarking upon an epic, rollicking adventure throughout Chicago.

But if you scour a roadmap of the Land of Lincoln for their hometown, you won’t find it anywhere. If you plug the city’s name into Google Maps, you’ll get bupkis. And if you ask a Chicagoan for directions to the place?

Well, whatever you get in return will be wrong.

Although that hardly stopped me from visiting it last weekend.

For children of the ’80s, today is a watershed anniversary as it marks 30 years since “Ferris Bueller’s Day Off” premiered in theaters on June 11, 1986. And as a child of the ’80s, I wanted to honor this momentous occasion. So last weekend, my wife Debbie and I pulled a reverse Bueller by escaping the city to explore the burbs.

On Sunday, after tipping my Cubs cap to Ferris by attending Saturday’s game at Wrigley Field fittingly clad in an “Abe Froman, Sausage King of Chicago” T-shirt, we put some miles on our car’s odometer (even if it wasn’t a vintage Ferrari) by setting off in search of Shermer, which may be mythical but isn’t entirely fictional.

Shermer, in fact, can be found all over the North Shore with bits of it Highland Park and Winnetka and pieces of it throughout Northbrook, Kenilworth and Evanston.

Meant to loosely represent Hughes’ hometown of Northbrook (which once was named Shermerville), the city of Shermer served as the setting for 16 John Hughes movies, including “Ferris Bueller’s Day Off,” “Sixteen Candles,” “The Breakfast Club,” “National Lampoon’s Vacation,” “Pretty in Pink,” “Weird Science,” “Uncle Buck,” and “Planes, Trains and Automobiles.”

In honor of Ferris, my wife and I mapped out the actual homes and hangouts frequented by Bueller and his famous Hughes film neighbors in the imaginary suburb.

Jumping on Lake Shore Drive we headed north through the city and began our expedition in Evanston, where the leafy neighborhood streets look as if they come directly from central casting. Puttering past 2602 Lincoln Street — without any car backfires — we checked out the house where Uncle Buck (John Candy) babysat his brother’s kids.
Less than a mile away at 3022 Payne Street, we next saw the home where Samantha Baker (Molly Ringwald) brooded inside her bedroom in “Sixteen Candles.”

Leaving Evanston, we weaved our way north to 230 Oxford Road in Kenilworth, where Neal Page (Steve Martin) arrived — finally — for Thanksgiving dinner with his family in “Planes, Trains and Automobiles.”

Next up was Winnetka, where we made a quick jaunt past the real estate office at 583 Chestnut Street that employed Katie Bueller (Ferris’ loving mother) before arriving at 671 Lincoln Avenue, where Kevin McCallister (Macaulay Culkin) was famously left “Home Alone.”

Tooling west to Northbrook, we drove past Glenbrook North High School at 2300 Shermer Road, where some interior footage for the “The Breakfast Club” was filmed, and then passed the water tower that once read in bold letters: “SAVE FERRIS.” Sadly, that message wasn’t saved.

Bidding Northbrook adieu, we headed into Highland Park where we rolled past the mansion at 1407 Waverly Road, home to heartthrob Jake Ryan and his raucous party in “Sixteen Candles.”

Jake Ryan’s house from “Sixteen Candles” (1984) at 1407 Waverly Road in Highland Park.
Then we made our final — and my favorite — stop on our tour: The house at 370 Beech Street where Cameron Frye sent his father’s prized Ferrari exploding from the garage into the wooded ravine below.

I could almost hear the glass still shattering.

Thirty years have now passed since that day in Shermer, and I’m glad that we stopped last weekend to look around.

Because when it comes to Ferris Bueller and his hijinks, I do miss it.