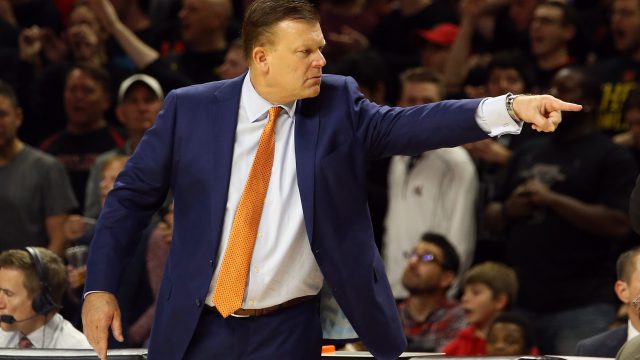 It’s been a dark decade for Fighting Illini basketball.

But is there finally a light at the end of the State Farm Center tunnel?

I think so, with Brad Underwood having mercifully taken reins from the overmatched John Groce. Although, with so much youth and a lack of size, Underwood’s inaugural Illini squad may not quite reach that light this season with the program’s first NCAA Tournament bid in five years.

Then again, who knows, maybe they will.

What I do know, is that for the first time in ages, I’m actually looking forward to watching Illinois hoops. Gone are the days of tired slogans and hollow coach-speak from Groce, and in is a no-nonsense coach in Underwood who won’t sugarcoat his team’s shortcomings and actually runs a real offense.

It’s that spread offense – which made its official debut on Friday night in the Illini’s season opener at State Farm Center vs. Southern – that excites me the most about Underwood. Designed around spacing, ball reversals and hard cuts, it’s helped Underwood’s teams at Stephen F. Austin and Oklahoma State average 76 points and rank in Ken Pomeroy’s top 60 for offensive efficiency the past three seasons. Not coincidentally, each of those teams also reached the NCAA Tournament – a place where Illinois hasn’t danced since 2013.

Filled with complexities and nuances, I expect the new Illini offense to remain a work in progress for a sizable chunk of the season. I’m told, in fact, that Underwood has spent entire practices working only on players’ spacing without ever having them put up a single shot. And it’s because of that extreme learning curve that I didn’t sweat Illinois’ 80-67 exhibition loss to Eastern Illinois last week, nor will I stress out too much about other early-season hiccups.

It’s all part of the process. And in the end, Illinois may be too green this season to pile up the wins that they’ll need to go dancing this March.

Then again, who knows. Underwood has a knack for finding ways.

Shake up at Wrigley

Speaking of coaching shakeups, the Cubs have had a surprisingly fizzy one of their own this offseason.

Martinez and Hinske left for new jobs, while the other coaches were relieved of their duties. And while it’s been said publicly that the moves were all of Maddon’s own making, I strongly suspect that team president Theo Epstein and general manager Jed Hoyer did a lot of prodding. After all, I find it unlikely that Maddon, who admits mistakes about as often as Donald Trump, decided of his own volition that he needed a bunch of fresh voices in his ear for 2018.

But, regardless, I’m glad that the new voices will be in the dugout. I just hope that when it comes to his lineups and bullpen moves, Joe listens to them.

Patience is a virtue

It’s almost impossible to overstate the mess Tim Beckman (and Bill Cubit) left Illinois in, with cupboard so bare it would make Mother Hubbard blush. Despite starting 16 freshmen, having no legit quarterback and suffering a slew of injuries, the Illini aren’t getting destroyed in the first halves of games. Rather, they’re wearing down during the second ones.

That’s a positive sign, even if you have to squint to see it.