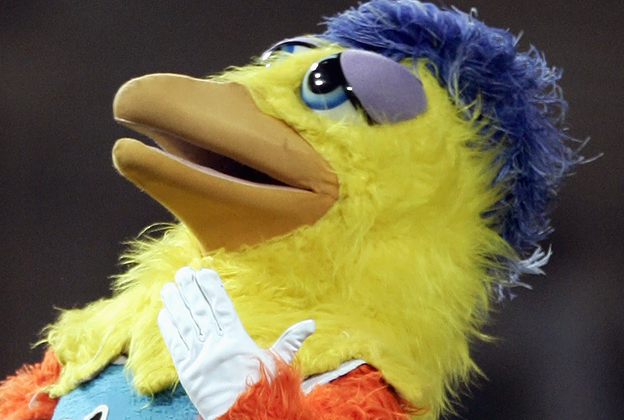 From the Saturday, May 7, editions of The Daily Journal (Kankakee, Ill.) and The Times (Ottawa, Ill.) …

So, the University of Illinois announced this week that it’s taking steps towards selecting the school’s first-ever mascot.

Except that it’s not.

That’s because Illinois has actually had a mascot before – and, no, I’m not at all talking about Chief Illiniwek, the school’s controversial, but still widely revered former symbol, who was never a mascot.

Rather, I’m referring to the night at Assembly Hall 34 years ago when U. of I. trotted out a costumed creature in the slapstick vein of Benny the Bull or the Phillie Phanatic, and saw it fail so miserably that the mascot was never to be seen again.

Although, it should be remembered – especially now.

On Jan. 14, 1982, the Illini hosted Ohio State in a basketball game during which the university unveiled the “Orange and Blue Bird,” a San Diego Chicken knock-off decked out in a Fighting Illini T-shirt and a pair of blue high-top gym shoes. To put it kindly, the bird’s introduction was fowl.

“It was a bird of ill repute the moment it appeared on the floor,” the Daily Illini reported. “When a new-fangled yellow, fine-feathered mascot was introduced to Illinois fans prior to the Illini’s contest against Ohio State Thursday night, verbal abuse was its immediate greeting.”

The following day, rumors swirled around campus that the “O-B Bird” was an attempt by the university to ease out Chief Illiniwek. Campus officials quickly sought to douse that firestorm with associate athletic director Vance Redfern claiming that the bird was actually not a mascot at all, but simply created to “get hype and get home-court advantage” at Assembly Hall.

Which, of course, is exactly what a mascot is.

More than three decades later, an Illinois student senate committee has voted 28-2-1 to “move forward” with the selection of a new mascot, prompting interim chancellor Barbara Wilson to announce that she will appoint a steering committee of 10 to 12 people, including representatives from “various stakeholder groups,” to begin the process. In a statement Wilson said, “I am optimistic that this initiative will help build school spirit and loyalty beyond athletics.”

As the saying goes, those who cannot remember the past are condemned to repeat it, which is why Illinois must remember the disastrous “O-B Bird” experiment. Because if the university tries to again force a manufactured mascot on a fan base that simply does not want one, history will indeed repeat itself – along with condemnation.

At the same time, however, I do believe that Illini fans very much want to fill the emotional void that was left by the retirement of Chief Illiniwek. But there’s only one way to authentically do that, and it’s by working with the Peoria Tribe of Oklahoma to create something new that honors Native Americans and embraces the spirit and intent of the Chief, even thought the Chief himself is not coming back.

Three years ago, the men who formerly portrayed Illiniwek submitted a plan to the university administration that would have brought back a tribe-endorsed incarnation of the Chief on a trial basis. He wouldn’t dance and his costume would have been developed in consultation with the Peoria, one of the original Native American members of the Illini Confederation. The plan also included generating up to $200,000 a year in apparel sales, donations and fundraising for the tribe.

The Peoria were interested in moving forward with what could have been a win-win for the school, the fans and the tribe, but former Chancellor Phyllis Wise refused to consider it. Barbara Wilson should.

Because rather than conjure up a new mascot that no one wants, Illinois should find a new way to better embrace its Native American roots.

That’s something we could all cheer for.