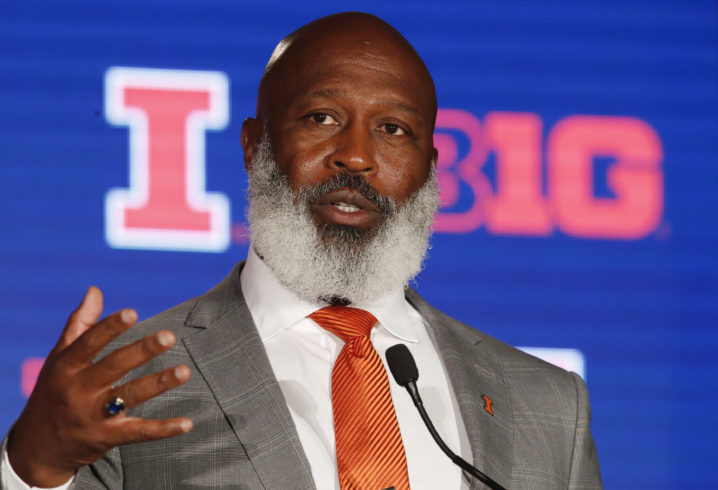 From the Saturday, Aug. 31, editions of The Daily Journal (Kankakee, Ill.) and The Times (Ottawa, Ill.) …

As the 2019 football season dawns in Champaign with Illinois’ opener against Akron (11 a.m., BTN), head coach Lovie Smith’s program has generated only nine wins in his first three years, and some fans are fed up.

In recent weeks, I’ve had one guy angrily tweet at me that Lovie should have already won 14 games (he didn’t explain how exactly; just that he should have). Others have declared that if the Illini don’t make a bowl game this season, Smith should be fired (“And athletic director Josh Whitman should go with him!”). One friend of mine, who’s usually quite rational, even went so far as to call Lovie “the worst Illini football coach of his lifetime” (Tim Beckman surely likes that one).

Like I said, they’re restless. But the Illini masses need to learn how to take it easy, because anyone hoping that Lovie Smith will be fired after this season is likely to be sorely disappointed. Barring a complete disaster (e.g., two or three wins and scads of Big Ten blowouts), Smith will almost certainly get a fifth season in 2020. And he almost certainly should.

The reality is that too many fans still don’t appreciate the scope and scale of the rebuilding job that Smith inherited when he was hired by Whitman in March 2016.
Five years earlier, mind you, Illini football was already in a bad way when Ron Zook was fired by former athletic director Mike Thomas after the 2011 season. Thomas then proceeded to drop an atomic bomb on the program when he hired Beckman, who spent the next three-plus years reducing the program – and the Illini brand – to rubble with terrible coaching, terrible recruiting and terrible press conferences before finally being fired just a week before the 2015 opener amidst allegations of player mistreatment.

It takes time to clean up from that. It just does. And coming from the NFL, Smith, not all that surprisingly, has had a college learning curve. His initial offensive and defensive coordinator hires in Garrick McGee and Hardy Nickerson were poor. Part of that was probably due to Smith’s unfamiliarity with what was needed for college coaching and recruiting, and part may have been because he had to put his staff together in March, an awkward time for hiring.

That late hiring date also put Smith behind the 8-ball with recruiting as he wasn’t able to build a class of his own that first season. So, while this is now Smith’s fourth full season at Illinois, in terms of his own classes it’s still his third.

Acknowledging all of that isn’t a defense of Smith, it’s just stating reality. Lovie absolutely has to prove himself over the next two seasons.

As he enters 2019, it looks like he may have a rising star in second-year offensive coordinator Rod Smith. On the flip side, Smith is now rolling the dice on himself as the coordinator tasked with fixing the Illini’s porous defense. We’ll see if he can. Recruiting is also starting to pick up, but the program continues to rely heavily on transfers to buttress the roster in the meantime.

By no means is there a guarantee that Lovie Smith will fully right the Illini ship. But it’s absurd to think he should already have it fully righted. Let’s let things play out and give the man proper time to show us one way or the other.