“And when the day comes for that last winning run. And I’m covered in beer. I look to the sky and know I was right …

To think someday we’ll go all the way.”

I went for a run last night.

Laced up my Nikes. Tucked my iPod headphones into my ears. Pulled my Cubs cap down onto my head.

And jogged off into Wrigleyville.

Every week since I moved to Chicago three summers ago, I’ve embarked on late-night runs through my neighborhood.

Heading down Sheffield to Addison, up Clark and along Waveland, I complete a circle around the ivy-covered burial ground six blocks from my apartment building.

Some nights while I run, Wrigley Field is jumping. Other nights, it’s silent.

And, occasionally, when the calamitous happens — as it did this past Wednesday and Thursday — it’s both.

In the same inning.

For Cubs fans, October never has been the kindest of months. Our tricks start a month before Halloween — and we never get the treats.

But after a century of heartache, this year was supposed to be different. It seemed different. And until this week, it was different.

The Cubs won 97 games, coasted to the NL Central Divison title, had the most imposing offense and pitching staff in the league …

And then, well, they started playing like the Cubs.

Twenty years ago, in the spring of 1988 when I was 11 years old, I recall thinking to myself that the Cubs couldn’t possibly go EIGHTY years without winning a World Series.

Eighty years? There was just no way.

I’ve, ahem … learned a lot since then.

Most of it the hard way.

And among my tough-luck lessons is the fact that when it comes to the Cubs, “The Curse” does exist.

In the embodiment of 100 years’ worth of pressure, it exists.

It does.
Now, that’s not to say there’s some billy-goateed spectre of evil lurking over Wrigley Field pulling on the Cubs’ marionette strings, but there is an entity surrounding the North Side ballclub that truly is tangible in the postseason.

And it’s something that can be crushing on Cubs players, often causing them to tighten up, no matter if they’ll ever admit that or not.

I’ve believed in that notion wholeheartedly ever since I sat in the upper deck at Wrigley Field for Game 6 of the 2003 NLCS.

As I’ve told people countless times since that infamous night, the feeling that crept over Wrigley — spread like a virus by the frozen-in-fear fans — after Steve Bartman reached for the fateful foul ball and Moises Alou flipped his lid was the eeriest I’ve ever experienced.

Unless, you were there at the ballpark, it’s almost impossible to fully explain. But you could literally feel the tension.

I’m certain the players felt it too. They had to. And it’s why they ultimately collapsed once things started going against them.

No matter what anyone says, Cubs players — once they get to October — know all-too-well that a century of failure is weighing on their shoulders. And it’s not just a city, but an entire nation’s eyes are on them.

I firmly believe that’s what happened again on Wednesday night, when Ryan Dempster lost his control. And on Thursday, when every Cub forgot how to field.

The incredible pressure to succeed made the Cubs fail.

And that’s the burden.

But that doesn’t mean that it can’t be lifted. I believe it can be. Although, it’s going to take a Herculean effort — and it will never be easy.

I honestly do think, though, that the best thing for this team right now is to get the heck out of Dodge(r) and head for the (Beverly) Hills.

There’s just too much pressure in Chicago right now.

Regardless of how they played in Games 1 and 2, everyone should remember that this Cubs team is good. Damn good.

It’s the best North Side bunch I’ve seen in my lifetime, and while it’s unlikely, it’s hardly inconceivable that they could win twice on the road this weekend.

For 5 good reasons why there is still reasonable reason to hope for a Cubs miracle, I suggest reading this excellent piece by Michael Bradt, the creator of the entertaining Cubs blog “Hire Jim Essian” who, coincidentally, I met on the Red Line this summer.

En route to a game at Wrigley, of course.

The points Bradt makes in his piece were the same ones I was bantering about with co-workers this morning once the fog from Game 2 lifted and I decided that rather than pout, I’d instead remain hopeful.

Sure, I’m hopeless, but the fact is:

During this, the most magical summer of my 32 years, I’ve been to a ridiculous 30 Cubs games (I counted them up tonight).

I’m just not ready to let go of this season just yet. In fact, today, I was able to buy tickets online to Game 2 of the NLCS.

It’s slated for next Friday, a night on which I’ll probably jog down to the ballpark, no matter what.

But it sure would be nice if the Cubs decided to show up there with me.

Even Mordecai Brown could count to three. 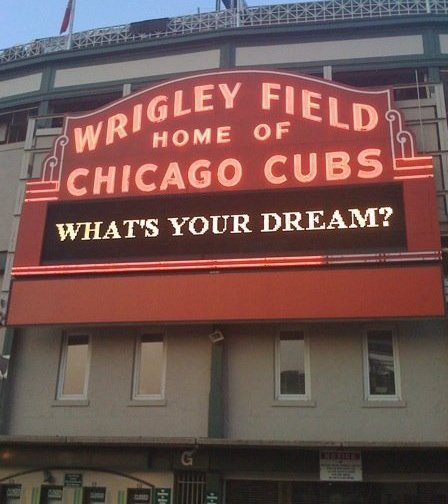