Right now, Cubs fans everywhere are in hiding. But few of them – save, perhaps, Steve Bartman – can likely steer clear of the spotlight as well as the one woman who during the mid-1980s had it shining on her every afternoon thanks to the WGN-TV cameras at Wrigley Field.

Say, hello – or, even better, “Holy Cow” – to former Chicago Cubs ballgirl Marla Collins, who after all these years remains a fan of the Lovable Losers. 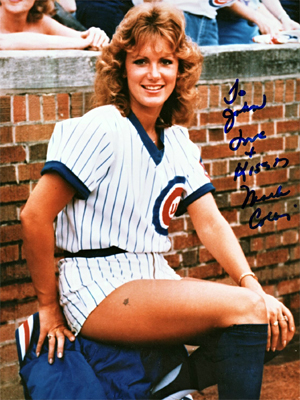 It’s now been 23 years since July 1986 when Collins, then 28 years old and the apple of many a Cubs fan’s eye, famously shed her pinstriped shorts and jersey to pose nude for Playboy magazine, only to be fired for breaking the “family-oriented spirit” of the Cubs organization.

Until this past Saturday, when she sat down with me during a breast cancer awareness fundraiser in Crystal Lake, Collins hadn’t done a newspaper interview in 10 years.

But, with the Tribune Co. (finally) finalizing a deal to sell the Cubs after 28 years of ownership, Collins took time to dish on her days as Major League Baseball’s first ballgirl and revisit her dismissal, still considered one of the most sensational management decisions made during the Tribune Co.’s colorful tenure.

While with the Cubs from 1982-86, Collins – and her short shorts – became so iconic among Chicagoans that, without even trying, she remains on the minds of many of them even today.

“Just a couple weeks ago, actually, my friends started calling me and saying, ‘Marla, you’re on the radio,’ ” said Collins, now 51. “They said that on Eric & Kathy (the WTMX 101.9 FM morning show), they were talking about me asking, ‘Where’s Marla? Where’s Marla?’ ”

Well, Marla is in Barrington, where she’s now the divorced mother of two daughters, ages 20 and 17. She works in downtown Chicago, conducting infant echocardiograms for a private doctor’s office. And, just like many Cubs fans’ memories of her, Collins’ own recollections of the Cubs remain as vivid as ever.

A native of Oak Lawn, many might not know that Collins actually began her baseball-related career at Comiskey Park, where the White Sox astutely recognized that men enjoy the combination of baseball, beer and pretty girls.

“I had a beer concession at Sox Park. I was the only girl who had a stand and so all the guys came there,” Collins recalled. “For some reason, during one game there were Cubs people at Sox Park and they met me and asked if I’d be interested in becoming a ballgirl at Wrigley Field when the Sox were out of town.”

Collins accepted the gig, which paid $150 a game but boosted her profile immeasurably, as Harry Caray & Co. gave her as much screen time as the ivy.

And it wasn’t only the fans that noticed her.

“After the first season, the Cubs moved me over next to the visitors’ dugout,” Collins said. “So every game, I’d have the ball boy coming up and handing me notes from players, asking me out. I’d look in the dugout, and there the guys would be waving at me.”

In addition to going out on dates with a handful of Cubs and once with broadcaster Steve Stone, Collins’ All-Star lineup of beaus in the ’80s included Keith Hernandez of the Mets, Steve Sax of the Dodgers and George Brett of the Royals, who actually visited Collins at her beer stand inside Comiskey just to ask her out.

Not long after joining the Cubs in ’82, Collins said she was approached by Playboy, but turned down several offers before finally accepting in 1985.

“I knew I wasn’t going to be a ballgirl forever,” Collins explained. “I actually was getting married and was going to leave the team after the 1986 season anyway. I knew the Cubs probably wouldn’t like the pictures, but they were tasteful. And the magazine was the September issue, which was towards the end of the season. But then, an early version came out on the West Coast in July.”

Cubs brass got wind of it, and even though Collins said her direct boss gave her permission to work with Playboy, she was summoned to Wrigley on July 22 and informed of her dismissal.

Apparently, the sex symbol the Cubs had created had become too sexy, prompting legendary Tribune columnist Mike Royko to write, “Of course it’s hypocritical. But hypocrisy is the very backbone of our sexual moral standards. Many of our outstanding bluenoses are secret lechers.”

Collins, for her part, said she wasn’t angry, but still feels the firing was unfair.

“I wasn’t mad. I accepted it,” she said. “But the Cubs knew what they were doing when they put me out there. They were the ones who wanted my shorts shorter.”

As for the media furor that ensued following her firing, Collins says, “I don’t know what I thought, but I didn’t expect that. I can’t imagine, though, what it would be like today. It would be crazy. It’s a whole different world with the Internet and everything.”

And, as for regrets, Collins says she has none. Well, maybe, that’s not entirely true.

She still hasn’t seen the Cubs win a World Series, after all.

“It’s going to happen,” Collins said. “It better, at least.”

For more on Marla, check out this CBS Channel 2 news story from 1984 when the Cubs were rolling into the National League playoffs. The video itself is interesting enough, but wait until the very end when you hear the line that Walter Jacobson drops.

Oh, Walter, how much we’ve learned in the 25 years since.