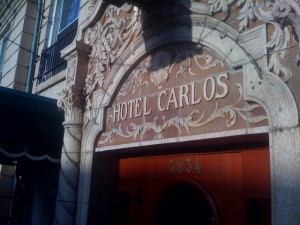 Today’s column from the Kankakee Daily Journal and The (Ottawa, Ill.) Times …

Baseball, perhaps more than any other sport, is a game of numbers.

From 60 feet, 6 inches and .406, to 61 and 755 (I don’t recognize other home run records), the National Pastime just drips with digits. And the Chicago Cubs, perhaps more than any team not named the Yankees, have an identity that’s defined by them.

Numerals such as 1908, 1945 and 2003 are branded on the ballclub like “Rawlings” on horsehide. And, for better or worse (mostly worse), Cubs fans know each of them as well as their own birthdates.

As for myself, I’ve long been able to tick off any number of Cubs-related numbers at the drop of a cap. But it wasn’t until this past weekend that I became familiar with a new one (509) that’s, in fact, quite old.

And a “Natural” fit in both Cubs – and baseball – lore.

So, turn the key with me and enter Room 509 of the Sheffield House Hotel, the most famous place in Chicago that you barely knew existed.

And where I slept last Sunday night.

Located just 427 paces from Wrigley Field at 3834 N. Sheffield Ave., the Sheffield House – known until recent years as the Hotel Carlos – was constructed in the 1920s.

But Room 509 – the location where Chicago Cubs shortstop Billy Jurges was famously shot by showgirl Violet Valli in an incident credited for partially inspiring Bernard Malamud’s 1952 novel “The Natural” and the 1984 Robert Redford movie by the same name – remains stuck nearly eight decades in the past.

On July 6, 1932, the Cubs were one month from ripping off 25 wins in 30 games to propel themselves to a World Series during which Babe Ruth belted his (So-)Called Shot at Wrigley Field and the Yankees swept their way to the championship.

On the morning of July 6, however, the Cubs were merely struggling through a four-game losing streak. And 25-year-old Billy Jurges was sound asleep at the Hotel Carlos, where he lived during the season, when Valli rang him from the front desk, asking to see the man she wanted to marry and discuss their “love affair.”

Valli – reportedly drunk on gin and having left at home a suicide note addressed to her brother that read, “Life without Billy isn’t worth living, but why should I leave this world alone?” – was told by Jurges that she could come up to Room 509.

An argument soon broke out and Valli pulled out a small .25-caliber pistol, shooting Jurges in the side, rump and hand before suffering a wound to her own arm when he wrestled the weapon from her.

Charges were never filed, but Jurges spent 16 days on the disabled list, Valli earned a Vaudeville show from the ensuing notoriety and a famous book and movie were ultimately inspired.

And last week, with the calendar on the cusp of a new baseball season and me being me, I got the itch – naturally – to visit Room 509 myself.

So after spending Easter with my family in Bourbonnais, I reserved Room 509 by phone and left for Chicago with my mom telling me, “If you get scared, call us.”

Now, I didn’t really think there was much reason for concern – the Sheffield House sits less than three blocks from my own apartment, after all – although the aged hotel’s current patrons are, well, definitely not Major Leaguers.

As I drove north, I thought about what to bring to Room 509, where two years ago the Chicago Sun-Times had a psychic convene with Jurges’ supposed ghost. A Milton Bradley voodoo doll? The shrunken – and bleached – head of Sammy Sosa? Goat soup?

Eventually, I opted to go pretty much empty-handed (like the Cubs themselves) and entered the hotel’s 1920s-style, terra cotta lobby armed with only my backpack, laptop computer and a downloaded video of “The Natural.”

Upon check-in, I walked up five flights of stairs past eerie hallways filled not with people, but stacked mattresses and furniture. And in a corner of the top floor, I found Room 509 and turned the key.

Inside, was a tiny, white-walled space that couldn’t have looked much different when Billy Jurges called it home. Measuring about 14 feet by 9 feet, the spartan room featured a bed, a dresser and mirror, a small color TV, one table, a broken chair and an ancient refrigerator that didn’t work.

The room’s phone had no dial tone. I couldn’t get the hotel’s Wi-Fi signal in my room. And my iPhone wouldn’t even allow me to post a status update to Facebook.

I thought, either the spirit of Billy Jurges doesn’t like technology, or Rod Serling was about to appear and tell viewers that I’ve just entered the Twilight Zone.

Undeterred, I laid down on the bed and began watching “The Natural” on my computer as lightning and rain crashed down – both on the movie screen and beyond Sheffield Avenue outside my window.

Three hours later, having seen Roy Hobbs get shot and then redeem his career, I dozed off and awoke the next morning for Opening Day with sunshine – and no showgirls – outside the room.

Although I think the Cubs could have actually used Violet Valli later that afternoon.

She packed more pop than anyone in their lineup.