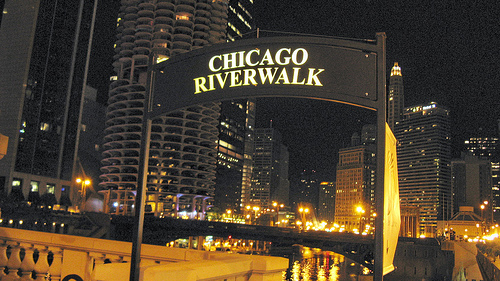 It’s known as the city of Big Shoulders, but if nothing else, Chicago is also a city of big ideas.

From the tip of Navy Pier to the top of Willis Tower to all those tints reflecting off “The Bean” on a sunny autumn afternoon, you can see those ideas in action throughout town – especially downtown.

And someday soon, we could see another one come alive.

That is, If we’re lucky. And if Chicago can find the cash, which of course, is the biggest “if” of all.

Last week, city officials publicly unveiled a bold vision to create another iconic Chicago venue along the lines of Millennium Park when they proposed a $100 million build-out of the Chicago River riverwalk stretching from State to Lake streets.

The project, while only conceptual and with no current timetable, still offered a clear vision for the riverwalk, an area that despite its incompletion I called the city’s best-kept secret in a column last year.

Last week, the riverwalk plans presented by the mayor’s office featured distinctive names and themes for each of the project’s six blocks. These include “The Boardwalk” with wood planks and floating gardens, “The Jetty” promoting river ecology, “The Swimming Hole” which may some day even feature swimming in the actual river, “The River Theater” with landscaping and shade trees, “The Cove” with kayak rentals, and “The Marina” with restaurants and public seating for guests to relax while watching the river traffic lazily float by.

“This plan is a thoughtful way of interpreting the wildness and naturalness of the river and connecting it into the center of the city,” explained Margaret Frisbie, executive director of Friends of the Chicago River. “Great public spaces have a lot going on. The Riverwalk has that possibility.”

Last week, I imagined those grand possibilities as I viewed the riverwalk’s proposed expansion areas while zipping along on the Chicago Water Taxi, the city’s wonderfully unique transit service that picked me up near the Ogilvie Transportation Center and dropped me off in front of Trump Tower.

The thought of Chicago finally taking full advantage of the river that runs through it is an exciting one, to be sure. But just as exciting to me is the knowledge that Chicago is still willing to dream big in this era when, according to the Chicago Sun-Times, the city’s 2013 budget deficit is projected at about $300 million and the Chicago Public Schools’ budget shortfall for next year is estimated at $1 billion.

When it comes to this massive riverfront beautification project the question, as previously mentioned, is how exactly would Chicago pay it? Especially when considering how in the past couple of years, the city has taken such cost-cutting measure as slashing the duration of the Taste of Chicago and ending its July 3 lakefront fireworks show altogether.

Reportedly, the city has submitted a letter of interest to the U.S. Department of Transportation for funding and is also said to be exploring public-private partnerships. But, as the Sun-Times pointed out in a recent editorial, that’s a long way from the city actually getting its hands on any money.

Still, the newspaper speculated that Mayor Rahm Emanuel wouldn’t have signed off on all the hoopla surrounding the unveiling of the riverwalk proposal if he didn’t feel confident about conjuring up the cash to pull it off.

During the announcement, Emanuel even went so far as to say “It’s a plan that’s essential” before adding that he campaigned on the idea of the river as the city’s “next recreational frontier.”

And it’s invigorating to see the city still boldly go for such big ideas.