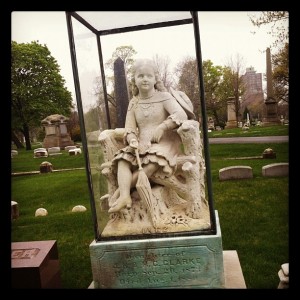 While driving out of Chicago on Interstate 55 last weekend, I spotted nearly as many roadside billboards hawking Haunted Houses throughout the area as I did highway mile markers.

Every one claimed to be spookier than the next, but what they managed to scare up in my head was this: What are the most (supposedly) haunted places in the city of Chicago itself?

This week, I dug into that topic and here are a few of the skeletons that I uncovered inside some of the Windy City’s creepiest closets …

The Museum of Science & Industry

Known for its scientific and technological exhibits, the museum on Chicago’s South Side also is purported to have some other things on display.

Those of the spectral variety.

Originally built as the Palace of Fine Arts for the 1893 World’s Columbian Exposition, MSI is the only structure that still survives from that legendary event. Perhaps attracted to its history, the museum is said to home to a number of ghosts, most famously that of Clarence Darrow, the lawyer who famously battled with William Jennings Bryan in 1925 over the issue of teaching evolution in schools and who also defended the young killers in the infamous “Leopold and Loeb” murder trial in 1924.

Darrow lived in Hyde Park and when he died in 1938 his cremated remains were scattered in the Jackson Park lagoon beside the museum. In 1957, the bridge spanning the lagoon was named in honor of Darrow and it’s said that the elderly attorney’s ghost is often seen walking near the lagoon or strolling through the museum’s halls.

Situated at 520 S. Michigan Ave., the historic Congress Hotel was also built in 1893 to accommodate guests visiting the Columbian Exposition. It’s now supposedly the permanent home to a number of ghosts.

Guests have reported flickering electricity and “phantom” noises inside rooms. Hotel employees, meanwhile, have claimed that the specter of a young boy haunts the north tower while a female ghost whispers in the ear of anyone who enters the hotel’s banquet room alone.

The haunting Romanesque Revival mansion that looms at 632 N. Dearborn St., was built in 1892 and once served as home to the Chicago Historical Society. Since 1990, however, it has been a River North nightspot, and Excalibur is said to have some unique after-hours visitors.

In 1915, following the Eastland disaster that drowned more than 800 people in the nearby Chicago River, the building was reportedly used as a makeshift morgue for victims. Some say they’ve never left.

Others, meanwhile, believe that ghosts from the Great Chicago Fire – including a notorious “Lady in Red” spirit – haunt Excalibur. Staff and visitors claim to have heard unexplainable sounds such as boxes being moved in a locked, empty room or to have seen objects such as billiards balls move on tables with no one near them.

Nestled along North Clark Street, Graceland serves as the final resting place for a wide array of famous Chicago figures such as Marshall Field and George Pullman.

But the quiet cemetery is perhaps most famous for a resident that isn’t so restful – six-year-old Inez Clarke, who was killed by a lightning bolt in 1880.

Distraught over her death, Inez’s parents commissioned an artist to create a sculpture in her exact likeness and place it over her grave. The sculpture was then encased in a transparent glass box intended to protect it from the elements.

Reportedly, however, many have claimed that the girl’s statue at times vanishes from its box – especially during lightning storms.

Have a Happy Halloween, everyone.