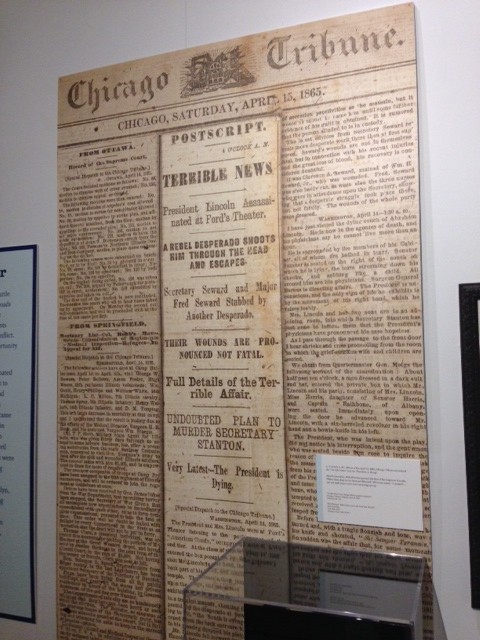 From the Saturday, March 1, editions of The Daily Journal (Kankakee, Ill.) and The Times (Ottawa, Ill.) …

Our state is called the Land of Lincoln.

But, ironically, when it comes to the Civil War that defined Abraham Lincoln’s presidency, the Great Emancipator’s home state of Illinois is likely one of the last ones you think about.
But think again.

Because there’s a lot of Civil War history in Illinois, and through March 24, much of it’s living at the Newberry Library in Chicago’s Gold Coast neighborhood. With an exhibition entitled “Home Front,” the Newberry – Chicago’s independent research library, founded in 1887 at 60 W. Walton St. – captures and memorializes daily life in the Civil War North.

“More than 150 years after it began,” the Newberry explains in the exhibition, “the Civil War still occupies a prominent place in our collective memory. Paintings and photographs, plays and movies, novels, poetry, and songs remind us of the struggle over the future of slavery, Lincoln’s determination to save the Union, and the brutality of brother fighting against brother. Battles and battlefields occupy us, too. Bull Run, Antietam, and Gettysburg all conjure up images of desolate landscapes strewn with war dead.”

The frontlines, however, weren’t the war’s only landscapes. Across the country, from the East Coast to the “West,” which Chicago was then considered a part of, civilians had their lives thrown into turmoil. The Newberry’s exhibition explores these connections between the Northern home fronts and Civil War battlefronts, including war relief work and women’s changing roles due to the conflict. It features beautiful paintings from the Terra Foundation for American Art, as well as compelling books, magazines, photographs, correspondence, sheet music and newspapers from Newberry’s own Civil War archives.

The exhibition is rich with an array of history and artifacts, but what I found most interesting is what it revealed about the Windy City during the Civil War.

“Chicago sits hundreds of miles from most Civil War battle sites, yet the city was intimately linked with the war,” the exhibition explains. “Railroads continuously moved troops from the North and West through the emerging hub of Chicago, providing residents with a constant physical and visual reminder of the conflict. Chicago’s leading citizens turned the war into an opportunity for both civic boosterism and personal profit.”

According to “Home Front,” many Chicagoans volunteered for relief efforts coordinated by the U.S. Sanitary Commission (USSC), which sought to address unsanitary living conditions in Army camps and improve medical care for Union soldiers.

Soon after its founding in 1861, the Chicago Branch of the USSC became “the most important and innovative relief organization in the West.” Its treasurer was a leading manufacturer named E.W. Blatchford who is said to have done more to aid the North’s war effort than any other Chicagoan by helping to move goods, people and information from home to the front and back again.

In 1863 and 1865, the USSC’s Chicago Branch hosted the first and last of the nation’s many Civil War sanitary fairs, which were designed to celebrate human achievement – and I assume sanitation? – while raising money and collecting supplies for the U.S. Army.

Many Northern cities, including Boston, Rochester, Cincinnati, Brooklyn, Cleveland, Pittsburgh, followed Chicago’s lead, holding sanitary fairs of their own. The Newberry says, “These wartime relief efforts bridged the geographic and emotional distance between the Northern home front and the Southern battlefields, and brought the war home to Chicago.”

Bringing forth emotion at the “Home Front” exhibition is a giant recreation of the Chicago Tribune’s front page from April 15, 1865, when a special “4 o’clock A.M.” edition announced the “Terrible News” that the “President is Dying.”

And here in the Land of Lincoln, that’s still news that really hits home.