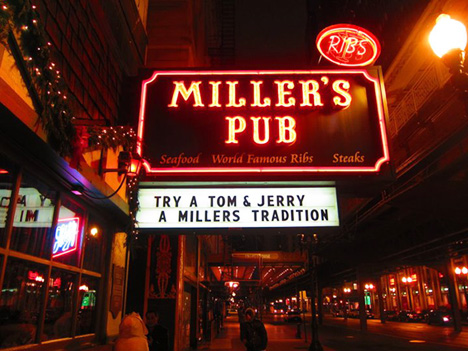 From the Saturday, Dec. 3, editions of The Daily Journal (Kankakee, Ill.) and The Times (Ottawa, Ill.) …

There are tough tables in Chicago.

And then there’s the Walnut Room in December.

Located on the 7th floor of Macy’s (R.I.P. Marshall Field’s) at 111 N. State Street, the Walnut Room was the first-ever restaurant inside a department store and has served as a Chicago institution since 1905. Today, it’s as famous during the holiday season for its scarce reservations and long wait times for tables as it is for its wood-paneled walls and spectacular 45-foot-tall Christmas tree.

In lieu of a booth, you may be able to score a spot at the small bar (open only when the restaurant is) and grab a signature holiday drink, such as the “Cinnamon Toast” (apple cider, Amaretto, cinnamon, sugar and whipped cream) or the Eggnog Brandy Alexander (eggnog, brandy and crème de cacao).

Either could serve to keep you warm in Chicago’s holiday chill. But they’re far from the only ones, as the Windy City is filled with seasonal beverages. And here’s the best of the brew.

At Daley Plaza, Christkindlmarket – the open-air market and festival inspired by the original in Nuremberg, Germany, that dates back to 1545 – is most famous for its glühwein. Roughly translated as “glow-wine,” from the hot irons once used for mulling, glühwein a traditional German holiday hot spiced wine and Christkindlmarket claims to have perfected it “to please the palate and warm the heart.”

In Chicago, the annual beverage is considered so special that it comes in a souvenir cup shaped like a boot and decorated with the market’s signature log and year.

Simon’s Tavern has served as an anchor of Chicago’s Swedish enclave of Andersonville since 1934, but it’s known citywide for its famed glögg.

Billed as the “home for glögg in Chicago,” Simon’s (5210 N. Clark St.) specializes in the traditional Swedish version of hot, mulled wine, which dates back centuries and is made from a combination of port wine blended with aquavit (Swedish brandy), raisins, orange peel and other spices.

As an added treat at Simon’s, the glögg is served with a side of ginger snap cookies.

When you put the words “hot chocolate” in the name of your restaurant, you had best make sure that you serve a mean cup of it. With that in mind, Mindy’s Hot Chocolate, the popular eatery and dessert bar in Chicago’s Bucktown neighborhood, has indeed earned its rep – and justified its name.

As the mastermind behind Hot Chocolate (1747 N. Damen Ave.), pastry chef Mindy Segal serves up an array of contemporary American cuisine, which can be accompanied by rich flavors of hot chocolate that include dark, Mexican, chai and pumpkin white. Each cup also comes with Mindy’s homemade marshmallows.

If you’re not in the mood for cocoa, the menu also offers hot buttered rum and other warm mixed drinks to spice up the season.

Since 1935, Miller’s Pub (134 S. Wabash Ave.) has been as much of an institution in Chicago’s Loop as the “L” tracks. Frequented by tourists, city folk and celebrities, the restaurant is best known for its BBQ Canadian baby back ribs but, during December, it’s also famous for its signature holiday drink: The Tom & Jerry.

A mix of rum, brandy, egg whites, sugar and vanilla served in a coffee mug with a stick of cinnamon, the Tom & Jerry is a unique concoction. It also happens to be my favorite Chicago holiday spirit to put me in the holiday spirit. Cheers.