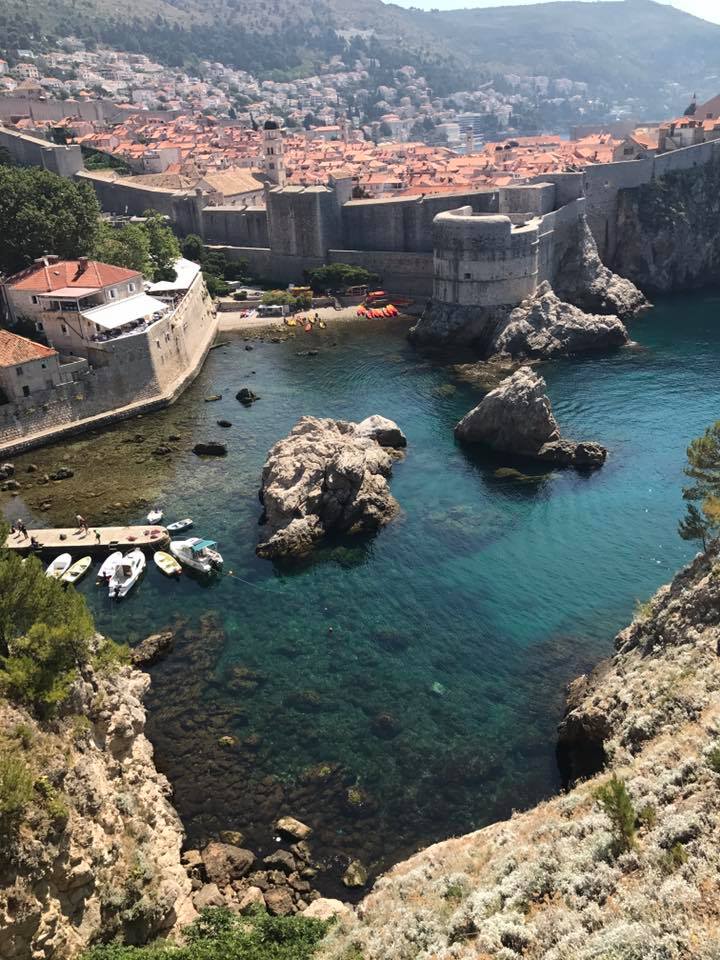 From the Saturday, July 1, editions of The Daily Journal (Kankakee, Ill.) and The Times (Ottawa, Ill.) …

Curling along the shoreline across the Adriatic from Italy, Croatia’s Dalmatian Coast lies 5,000 miles from Chicago. But growing up as a Bulls fan during the 1990s, it seemed in some ways like it was only 1.8 seconds away.

That’s a Toni Kukoc reference for you youngsters.

Ever since Kukoc – aka, the “Croation Sensation” – joined the Bulls in 1993, the season after Michael Jordan retired for the first time, and then went on to play a key role during the team’s second “Three-Peat” run, I’ve known of his hometown: Split. But I never imagined then that one day I’d actually visit Kukoc’s homeland, or find the once war-torn nation to be filled with such remarkable natural beauty and man-made magic.

Last week, however, my wife and I did just that when we spent a week vacationing along Croatia’s breathtaking southern coast making stops in the ancient cities of Split, Hvar and Dubrovnik. Along the way, we saw a few things.

Every time a Croatian cabbie, doorman or tour guide asked where we hailed from, their response to mine was basically the same: “Chicago! Toni Kukoc! He still has a home there!”

That he does, as since 2015 Kukoc has worked as special advisor to Bulls owner Jerry Reinsdorf. Beyond basketball, the Croatians we met also knew of Chicago for its nickname (“The Windy City”), the Cubs and even the Bears.

Blissfully, not a soul invoked the name of Al Capone.

If anything has put Croatia on the global map these days, it’s dragons.

Fictional ones, of course.

Both Split and Dubrovnik have served as filming locations for HBO’s hit fantasy show “Game of Thrones,” with the latter’s ancient walls serving as the backdrop for the mythical capital of King’s Landing. In Dubrovnik, we embarked upon a three-hour “Game of Thrones” walking tour – our guide’s warning beforehand: “Stairs are coming” – which included exploring “The Red Keep” (real-life Fort Lovrijenac) and the stairs and street where villainous Cersei Lannister began her infamous “Walk of Shame” on the show.

In Split, we visited the cavernous basements of Diocletian’s Palace, which served as the setting for the dungeon where Daenerys Targaryen chained up her aforementioned dragons. And in both cities, our tour guides amusingly complained about not being chosen as extras on the show – while their friends and relatives were.

Perhaps the most remarkable thing about the Old City districts in Croatia of the complete lack of big-brand commercialization. While strolling down winding alleyways and through spacious piazzas, there are no McDonald’s, no Starbucks, no Subways. Nearly every restaurant, bar, coffee shop and store you see is local.
That’s a pretty unique experience these days, no matter where you are.

Battling back from war

Lurking behind the beauty of Croatia’s coastline and architecture lies the country’s war-torn past. From 1991 to 1995, the Croatian War of Independence – known locally as the “Homeland War” – raged between the Croats and the Serbs after the breakup of the former Yugoslavia.

Dubrovnik’s Old City, a UNESCO World Heritage Center, was shelled heavily during the war, and a museum on nearby Mount Srdj memorializes the siege. It’s remarkable to see how the city – and its people – have rebounded from a crisis still so relatively recent.

During a sunset cruise in Split, we met a family whose daughter had just finished a semester studying abroad in northern Croatia. Their hometown? Orland Park. Three days later, we ran into their daughter again on a path in Dubvrovnik. It turned out that the family was staying at our hotel.

It’s a big planet out there. But a small world.