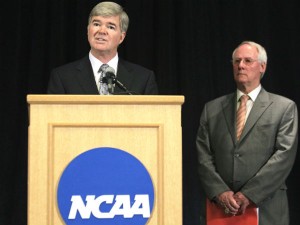 But if you were looking for a prairieland comparison, the Texas Roadhouse in Champaign on an Illini football game day could fit the bill.

And, I assume, it’s also that lucrative for the owners of the restaurant where hundreds of people pour inside to feast on steaks and smothered chicken after they’ve feasted (or starved) on football at Memorial Stadium.

However, if the NCAA this week had instituted the “death penalty” and canceled Penn State’s 2012 football season, Texas Roadhouse likely would have looked more like a Texas Ghost Town on Saturday, Sept. 29.

It also affects the hot dog vendors at Beaver Stadium in State College, Pa. And it affects restaurateurs and bar owners in Champaign. It also affects countless business owners and workers in Lincoln, Iowa City and West Lafayette, where PSU will travel for conference road games.

Yes, Penn State football affects a lot of people, many of whom could hardly have had less to do with the stomach-churning child sex abuse scandal and shameful cover up that has infested Happy Valley.

On Monday, NCAA president Mark Emmert announced severe penalties for the PSU football program that include a $60 million fine, a four-year postseason ban and massive scholarship reductions that will decimate the program, but stopped short of instituting the death penalty.

Emmert explained that the NCAA worried about the unintended consequences of a complete ban, saying: “Suspension of the football program would bring with it significant unintended harm to many who had nothing to do with this case. The sanctions we have crafted are more focused and impactful than that blanket penalty.”

And I agree. For my money (I am an Illinois football season ticket holder), it’s not appropriate to penalize other individuals, institutions and businesses for the colossal mistakes made at Penn State.

The death penalty would have done that. Consider for example that in 2005, the University of Nebraska’s athletic department commissioned a report about its economic impact on the Lincoln metropolitan area. It found that the Nebraska football program alone pumped $87.1 million into the region, including $35.4 million from fan spending and $31.2 million in worker’s income. Football also supported 2,130 jobs, with one-third of them being concession or event worker positions.

During the season of that study, the Cornhuskers played 11 games, meaning that each generated an average of nearly $8 million for the community. That’s money that would simply vanish from people’s pockets in Lincoln if Penn State didn’t come to town on Nov. 10. And why should the people of Nebraska, Illinois, Iowa or Purdue be expected to foot such a bill for Penn State’s punishment?

On Wednesday, Penn State president Rodney Erickson revealed that the school would have been given a four-year death penalty had it not agreed to the NCAA sanctions it accepted. He said he wanted to avoid that because of the economic impact that it would have had on State College.

“I think the death penalty would have been far, far worse for the program and the university over the long run,” Erickson said.

The same goes for the other communities in the Big Ten. By deciding against the death penalty, the NCAA chose in favor of them. And, honestly, this whole mess has already hurt enough people.

There was no reason to harm any more.