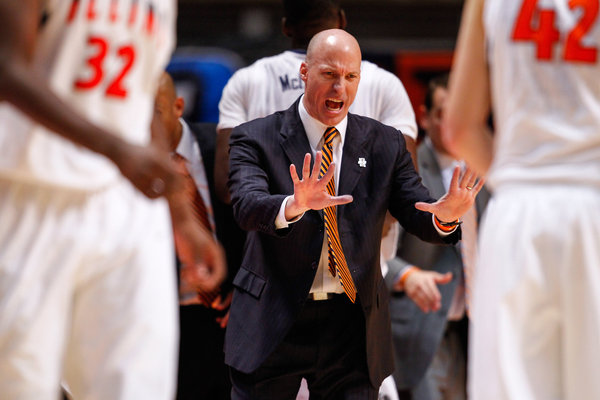 (CBS) During his introductory press conference back in December 2011, newly hired Illinois football coach Tim Beckman curiously refused to utter the name “Northwestern” while talking about the Illini’s in-state Big Ten brethren. Instead, Beckman declared that he would only refer to the Wildcats as “that team upstate.”

Since he said that, the Illini have only beaten Northwestern once in football and basketball games combined. (A narrow 57-56 win at Welsh-Ryan Arena last January is it.)

In the football season finale in November, Beckman’s Illini were pounded by “that team upstate” for an ugly 50-14 loss in Evanston. And on Thursday night Champaign, “that team upstate” ripped 23rd-ranked Illinois 68-54 in a defeat so puzzling that it left Illini fans simultaneously scratching their heads and screaming in frustration as they streamed out the Assembly Hall doors.

Now, Beckman isn’t to blame for the basketball loss … I don’t think. But, nevertheless, his misdirected attempt to elevate the Northwestern rivalry in the eyes of Illini Nation was an early sign of how the overwhelmed coach just couldn’t get anything right.

Among Illini fans, Northwestern has historically been viewed as more of an annoyance than a rival, a designation that has been reserved for the likes of Indiana and Iowa. Beckman clearly didn’t understand that. And he didn’t see that such fighting words with the Wildcats wouldn’t resonate much with his new team’s fan base, which doesn’t aspire to beat Northwestern, but rather expects it. Especially at home.