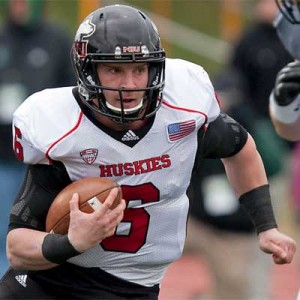 (CBS) While walking through the West Loop on Monday, I spotted a moving truck poking out from a loading dock down a side street. On its cardinal hood, the vehicle bore the name “HUSKIE 1” while its trailer shouted “GO HUSKIES,” along with a Northern Illinois University logo.

Now, as to why the truck was in Chicago, I don’t know. But as I strolled past, I couldn’t help but muse about the possibility that it was in town to deliver the hype for NIU quarterback Jordan Lynch.

Expect to hear plenty of that in the coming months.

Late last month, NIU launched an official “Jordan Lynch for 6” Heisman Trophy campaign – complete with a website and Twitter handle – aimed at promoting it’s the candidacy of its strapping senior QB who last season merely led the mid-major Huskies to the Orange Bowl and became the first player in FBS history to throw for more than 3,000 yards and run for more than 1,500, while producing more 100-yard rushing performances (12) than any other player in 2012.

On Tuesday, SportsOnEarth.com columnist Matt Brown wrote bluntly that, “Jordan Lynch will not win the Heisman Trophy in December. This is neither a profound statement nor a negative response to the Northern Illinois athletic department’s active campaign on behalf of its star quarterback. Barring some new level of statistical success, it’s simply reality, and everyone knows this. It also doesn’t matter: Lynch, Northern Illinois and the MAC should fight for all the attention they can get, despite the long odds.”