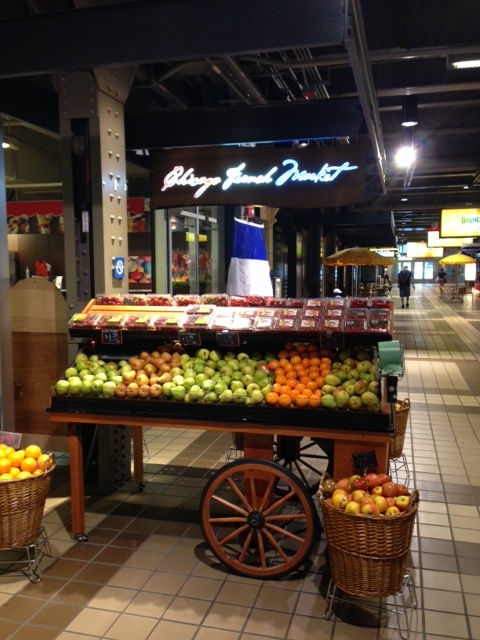 Two hundred and twenty-four years ago this weekend, the people of Paris, fed up with their nation’s monarchy, famously rose up and stormed the Bastille, marking the flashpoint of the French Revolution.

In the process, they also sparked a holiday.

In honor of said Bastille Day, which is Sunday, I didn’t raid any fortress prisons or ignite any revolts this week, at least none that I’m aware of. But I did manage to cut quite a culinary swath through the Chicago French Market, a food-lovers’ paradise so exotic and eclectic that it’s completely unlike any other dining venue in the Windy City.

Located indoors beneath the Metra train terminal next to the Ogilvie Transportation Center in the West Loop, the Chicago French Market opened in December 2009 at 131 N. Clinton St., through the co-development of the Bensidoun family, which bills itself as the largest market operator in and around Paris since 1953, the Chicago French Market. It was designed as a playground for food enthusiasts to stroll about, sniff, sample and savor the offerings of two dozen food vendors.

Since then it’s grown to become what Chicago Tribune food writer Kevin Pang calls “a quirky collective of food nerddom” with more than 30 vendors – including celebrity chef Stephanie Izard of Little Goat – hawking exotic fare ranging from spicy Vietnamese banh mi sandwiches to Montreal-style smoked pastrami and to Belgian fries and French cheese to much more.

“It’s the closest thing Chicago has to a food truck pod (see: Portland, Ore.), in the sense that small-batch producers specialize in one or two really well-done dishes,” Pang wrote. “Yes, it has ‘market’ in its name, and you can purchase fresh meats, cheeses and flowers to take home. But at heart, it is a glorified food court, and you can spend a day here hopping from stall to stall, eating yourself silly.”

I managed to do that myself this week, as I swung by the French Market twice for lunch. While strolling down aisles with names such as “Rue de Chicago,” “Rue de Paris” and “Boulevard Saint Germain,” I inhaled an intoxicating mix of aromas that leaps from baked goods (at Little Goat Bread) to grilled cheese and soup (at Spicy Monkey Soup Company) to beef stroganoff (at Wisma) to even flowers (at Les Fleurs) and soaps (at Abbey Brown Soap Artisan) all within just a few steps of each other.

On Tuesday, I chose to try a banh mi (like a sub sandwich) called “The Classic” ($7) that featured Vietnamese pork, American ham and French country pate to create a United Nations of flavors – with a spicy kick.

A day later, I returned to the Market to sample the specialty at Fumare Meats, which offers a nod to Schwartz’s Deli in Montreal with a truly amazing smoked pastrami on rye ($9) that’s spiced with cracked pepper and cloves as well as a crunchy roasted crust.

The patron ahead of me asked for Grey Poupon rather than yellow mustard for his pastrami on rye, prompting Fumare owner Dick McCracken to respond, “Do the yellow. Grey Poupon is too strong.” He then pointed at a black-and-white image of himself, his wife and William Shatner hanging above the counter and added, “See the photo? Shatner had the yellow.”

One can hardly argue with Captain Kirk (I didn’t). There’s also no arguing that the French Market is where any food lover should boldly go – and soon.

The French Market is open from 7 a.m. to 7:30 p.m. Monday through Friday and Saturdays from 8:30 a.m. to 5:30 p.m. Visit frenchmarketchicago.com for more information.