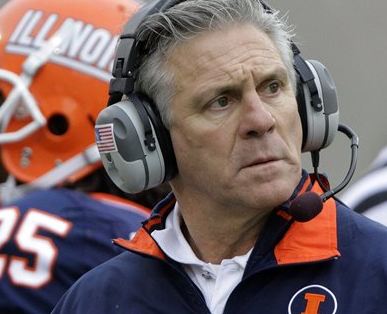 (CBS) Things Illini Nation learned this past week: 1) Ron Zook now works for a bank, and 2) Mike Thomas is willing to invest time in rebutting him.

The former may be strange, particularly for a football coach who sometimes couldn’t count his team’s scores, let alone beans.

And Thomas really needs to be bigger than that. After all, the Illini AD has bigger fish to fry these days than addressing his ex-coach’s gripes. Namely, his current coach’s performance, although the touchy reaction to Zook is likely tied to that.

Last weekend, the Sun-Times reported that the affable-but-daffy Zook, who led Illinois to a 34-51 record in seven erratic seasons before Thomas fired him in December 2011, is now working in Ocala, Fla. He’s not a football coach – not now, at least – but rather is serving as the community relations/business development officer for GatewayBank, of which he’s a shareholder.

“It keeps me busy,” the 59-year-old Zook told Sun-Times reporter Steve Greenberg, before eventually spinning off into lamentations about the demise of his coaching career at Illinois.

In explaining his final season in Champaign – during which the Illini started out 6-0 before promptly losing their next six – Zook tried to blame a Rose Bowl hangover from the 2008 season on the 2011 collapse.