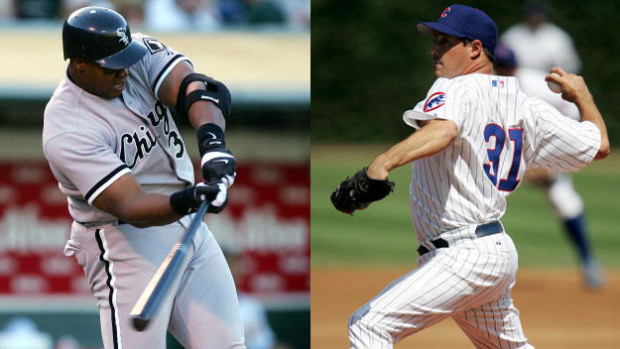 From the Saturday, July 26, editions of The Daily Journal (Kankakee, Ill.) and The Times (Ottawa, Ill.) …

Four summers ago, my dad, my brother and I, clad in our Chicago Cubs T-shirts and jerseys, sat on the grassy lawn in Cooperstown, N.Y., and cheered loudly as former Cubs slugger Andre Dawson was inducted into the National Baseball Hall of Fame.

As a Montreal Expo.

This weekend, we’re back in upstate New York – along with my mom, sister-in-law and 1-year-old nephew – as we prepare to celebrate former Cubs ace Greg Maddux’s induction into the Hall of Fame.

Not as an Atlanta Brave.

In what’s shaping up as Chicago’s best baseball weekend of the summer – both in spite of and because it involves no games – Maddux and fellow Windy City legend Frank Thomas will be enshrined in the Hall on Sunday. Thomas’ plaque will show him wearing a Sox cap, while Maddux’s will feature no logo, a wonderful nod to the pitcher’s deep affection for the Cubs despite having enjoyed most of his Hall-worthy years in Atlanta.

With Tom Glavine, Joe Torre, Bobby Cox and Tony LaRussa also set for induction, as many as 50,000 visitors are expected to descend upon Cooperstown on Sunday. I’m sure that many of them will be from Chicago, and hopefully for one day at least, Cubs and Sox fans can actually applaud each other.

After all, neither group has much else to cheer for this season.

During my lifetime – heck, during all of our lifetimes – the Cubs have suffered through more than their share of dark days. But perhaps none impacted the franchise more than the one in 1992 when the team failed to sign Maddux after he had just won the Cy Young Award.

After instead leaving Atlanta via free agency, Maddux would go on two earn three more Cy Young Awards, win 194 games and help lead the Braves to 10 consecutive playoff appearances, including a World Series championship in 1995.

Maddux returned to Chicago in 2004, but who knows how different Cubs history might look today if he had spent his entire career in town. Few athletes’ careers have been as intensely bittersweet as Maddux’s has been for Cubs fans.

When Frank Thomas made his White Sox debut on Aug. 2, 1990, and proceeded to bat .330 with seven home runs and 31 RBI over the final two months of the season, I recall that as a 14-year-old Cubs fan I was quite jealous watching the South Siders unveil a budding superstar.

These days, however, I view Thomas a point of Chicago pride.

With PED usage blighting so many sluggers during the 1990s and early 2000s – including a certain heart-tapper on the North Side – Thomas is something of a balm for the city’s baseball wounds.

And while sadly we can never be sure that anyone from the era was clean, my gut says that Thomas’ muscles were indeed natural and that his power numbers were too.

Fourteen have been inducted as Cubs, 12 as White Sox, two as White Stockings and two as American Giants of the Negro League. Throw in “unofficial” Cubs Hall of Famers Maddux and Dawson and the Windy City has had the pleasure of watching 14.2 percent of all Hall of Famers make big names for themselves in town.

That’s pretty impressive. Only New York – with 19 Giants, 17 Yankees, seven Dodgers, two Highlanders, one Met, and two Lincoln Giants of the Negro League – has hosted more legends, with 22.7 percent of HOFers having played in town.