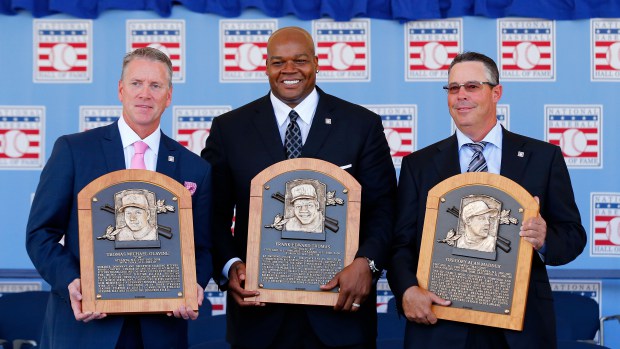 In fact, they’re often known for not drawing one.

But after this past weekend in Cooperstown, N.Y., perhaps that should change. Because fans of the South Siders showed up in droves Sunday to cheer on favorite son Frank Thomas as he was inducted into the Baseball Hall of Fame, and the much-maligned fan base deserves big kudos for their Big Hurt turnout.

I too spent this past Sunday in Cooperstown, along with my family, soaking in the history – and sunshine after the region’s morning showers blessedly evaporated. Coming into town, however, I wasn’t quite sure what to expect in terms of a fan turnout.

With a great induction class of Thomas, Greg Maddux, Tom Glavine, Bobby Cox, Joe Torre and Tony La Russa, I was certain that the crowd would be huge – and it certainly was at an estimated 48,000, Cooperstown’s the third largest ever – but I was unsure of how it would be broken down.

Would Braves and Sox fans show up like they should? Just how many from the Cubs’ and Cardinals’ passionate followings would turn out? And was Torre alone a big enough draw to lure in Yankees fans?

As it turned out, Braves boosters – another fan base often maligned for its lack of support – showed up in impressive force to support their two former aces in Maddux and Glavine and ex-manager Cox.

White Sox fans, however, weren’t far behind the Atlanta masses, and their numbers paced well ahead of the contingents wearing Cardinals, Cubs and Yankees apparel, all of which had solid showings.