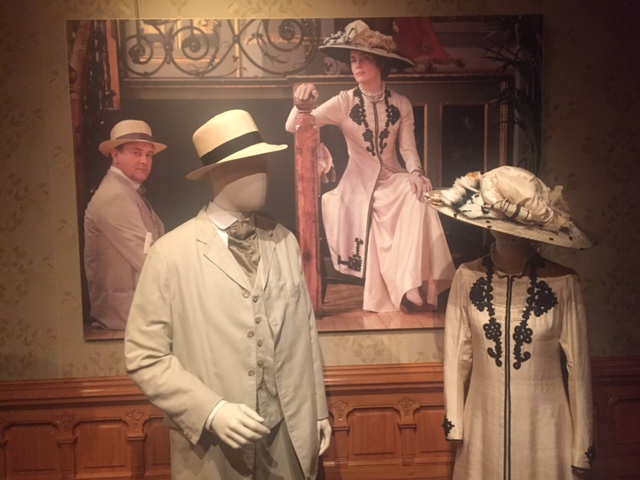 From the Saturday, March 5, editions of The Daily Journal (Kankakee, Ill.) and The Times (Ottawa, Ill.) …

If you’re a Chicagoland fan of Downton Abbey and want to visit the fictional Yorkshire estate of your Edwardian dreams, you’ll need to hop a 7½-hour flight to London Heathrow, followed by a 60-minute drive west to the real-life Highclere Castle, followed by, well, a time warp of 90 years.

Or, instead, you could simply visit Chicago’s Driehaus Museum in River North and experience the next best thing by gaining entrance into the opulent world of Lord Grantham, Lady Mary, the Dowager Countess and the rest of the aristocratic Crawley clan.

As Downton Abbey, the wildly popular British period drama from PBS Masterpiece, winds down with its series finale on Sunday night (8 p.m., WTTW), a new exhibit celebrating the show – and, in particular, its celebrated fashions – is just gearing up in the heart of the Windy City.

And it’s a must-visit for die-hard fans of the series.

Running through May 8, “Dressing Downton: Changing Fashion for Changing Times,” features 35 of the period-perfect costumes from the early 20th century worn by the Crawley family and their servants. Designed by London costume house Cosprop Ltd., some of the clothes are made from original fabrics and embellishments, while others were recreated from photographs, patterns and magazine pictures.

As fans know, the show’s costumes could often be more intricate than even the show’s twisting plotlines and in Chicago there’s no better place for them to take up temporary residence than the magnificent Driehaus Museum (40 E. Erie St.), located just a block off the Mag Mile.

With lavishly appointed galleries that once were the drawing rooms, living rooms, libraries and bedrooms of the Gilded Age mansion commissioned in 1879 by wealthy Chicago banker Samuel Mayo Nickerson, the home today is a museum devoted to the craftsmanship of the past. And it’s filled with enough breathtaking artwork, furnishings and décor to make even the Dowager Countess feel right at home.

Exploring fashions in Britain between 1912, the year the Titanic sank, and the early 1920s, the dawn of the Jazz Age, the exhibit’s program that “This period, marked particular by the impact of World War I (1914-1918), saw great changes in people’s lives and the way they dressed.”And through the outfits worn by the cast of Downton Abbey, visitors can experience it all.

Among the costumes on display is everything from the constrictive bustles and corsets of the Dowager to the liberating fashion of Lady Sybil. There are silk evening gowns worn by Lady Cora and Lady Rose, a riding habit worn by Lady Mary and the sturdy farm work outfit of Lady Edith. For the men, you’ll find a short dinner jacket and tie worn by Matthew Crawley, the formal dress military uniform of Lord Grantham and the chauffeur uniform donned by Tom Branson. The sober staff uniforms worn by the likes of Mr. Carson and Mrs. Hughes make appearances, as well.

All of this is accompanied by a hand-held audio device that shares with visitors details about the costumes, as well as historical tidbits about British history, narrated by the creators of Downton Abbey. That clever use of storytelling coupled with the worth-the-price-of-admission beauty of the museum itself, makes “Dressing Downton” quite an experience.

And perhaps no part of it was more fascinating to me than a gallery filled with historical photos of the styles and fashions that Chicagoans were wearing during the same time period that the Downton Abbey took place.

Even Lady Mary would have been impressed.

Admission to “Dressing Downton” is $25 and tickets must be purchased online beforehand at driehausmuseum.org.