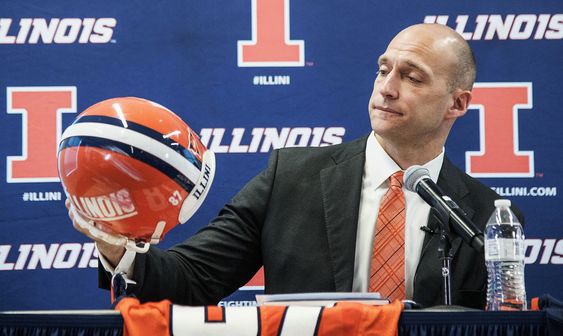 From the Saturday, March 12, editions of The Daily Journal (Kankakee, Ill.) and The Times (Ottawa, Ill.) …

New AD dazzles in dizzying week for Illini  Lovie Smith is the head football coach of not a pro team, but the University of Illinois. The thrifty school has ponied up $21 million for Smith’s six-year contract and committed another whopping $24 million for his assistants, who he’s stealing from NCAA powers and the NFL. And Illini football has gone from irrelevancy to the lips of talking heads nationwide.

Up is down. Down is up. Cats and dogs are living together.

Just a week ago, no one could have imagined that former Chicago Bears coach Lovie Smith would be taking the reins of the Illini football program.Yes, it’s been quite the dizzying week for the long-downtrodden denizens of Illini Nation, with a Twitter follower telling me on Monday, “I feel like I went to bed in Champaign, and I woke up in the SEC.”

With statements like that, it’s clear that this is not your father’s Illinois. No, this week’s turn of events is the sign of something completely different and incredibly exciting for Fighting Illini fans stunned to the see their major-conference school finally acting like a big-time program.

And all of that’s because Josh Whitman is not your father’s Illinois athletic director. Rather, the 37-year-old former Illini football player and Academic All-American is looking like an AD built for the 21st century.

Heck, maybe even the 22nd one.

Whitman admittedly wasn’t my first choice to take over Illinois’ messy athletic department, but he’s looking like he’s exactly what I did want — the right choice, as for years I’ve argued that the only thing keeping Illinois so far down in the dumps was having the wrong man overseeing its sports programs.

With his corporate mindset, Mike Thomas soullessly viewed Illinois as a job, not a calling, and he lugged from Cincinnati to Champaign a reputation of being a bad boss that elite coaches no longer wanted to work beneath. That was a bad combo. And due to Thomas’ lack of authentic passion or imagination coupled with his reputational baggage, Illinois ended up with coaches that took the football and basketball programs from bad to far worse.

Even once Thomas was finally jettisoned from Illinois in November, things had gotten so bad that many fans still saw no hope for the future. One lamented to me, “I’m so jaded by the past with Illini athletics, I just can’t imagine a situation where something good and smart would happen,” while another argued that Illinois couldn’t possibly hire a good football coach because “it’s where they go to get fired.”

To reinvigorate the gloomy fan base, I wrote that Thomas’ successor should be “someone with strong Illini ties who truly understands the school’s fan base, its quirks, its donors and its history while being more forward thinking than former AD Ron Guenther.”

And, then, as the months dragged on in the search for that successor, I urged patience while stressing how the university must take the time to actually get things done right, not just done fast. Because, as I wrote, there is a “formula for fixing Illinois athletics: The right AD + big donor enthusiasm + big donor dollars = a great chance to hire the right football coach, and if necessary at a later date, the right basketball coach.”

Whitman may have a law degree, but he clearly understands chemistry, because he’s turning that formula into an actual solution.

Josh Whitman’s hiring of Lovie Smith makes #WeWillWin sound like more of a promise than simply a hashtag.With Lovie’s hiring, Illini fans are as energized as they’ve been in a decade. The big-time boosters are clearly back on board with the size of Smith’s contract. And Illinois has loudly declared to the Big Ten — and the entire nation — that its athletic department is now seriously in the game.

For Illinois, I’ve always believed the right AD would make a world of difference. And I’m pleased to say I believe Josh Whitman is that right AD.