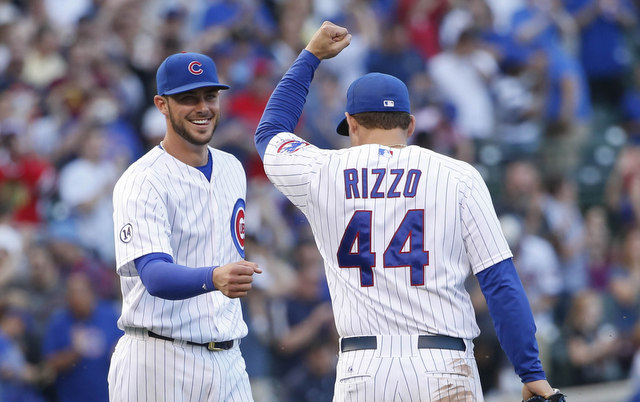 From the Saturday, April 11, editions of The Daily Journal (Kankakee, Ill.) and The Times (Ottawa, Ill.) …

Now, yes, the club technically played that sport at Wrigley Field from 2010 to 2014 – the first five seasons of the Ricketts era, which resulted in a 346-464 record – but during that stretch the Cubs’ business wasn’t really baseball. Or even bad baseball, something it’s always been about.

Rather, the Cubs’ business was, well, business.

During those dark, dull days for Cubdom, the face of the franchise wasn’t any player on the field, any manager in the dugout or even the club’s biggest name Theo Epstein, who as president of baseball operations worked more in the shadows than the spotlight until late 2014 when the club’s checkbook finally cracked open for the blockbuster acquisitions of manager Joe Maddon and pitcher Jon Lester.

Rather, the most prominent face representing the Cubs from 2010-2014 was that of Crane Kenney, the team’s president of business operations. And for fans of baseball, that really wasn’t a great face.

Season after losing season, it seemed as if every Cubs story of note was about Kenney battling the rooftop owners over a deal he had originally brokered, or Kenney wrangling with the city over the Wrigley renovation, or Kenney working to determining what TV networks the Cubs would call home in a given year. It got to the point where it seemed as if everything involving the franchise was about anything but baseball, and that Kenney – not Epstein – was the key power player in the entire organization.

Two years ago I had a discussion with a White Sox fan about the Cubs’ leadership. He said that as a detached observer, he felt as if the franchise’s brand was all over the place. The Cubs had too many cooks in the kitchen, and it wasn’t clear who was truly in charge of their recipe.

Was it Epstein, the man brought in to slay Chicago’s baseball curse in the way that he had vanquished Boston’s. Was it Kenney, who seemingly controlled the club’s purse strings and was dominating the newspapers and airwaves. Or was it team chairman Tom Ricketts, who had hired both men but also didn’t have a background in either baseball or sports business?

I told the Sox fan that he wasn’t wrong. The internal dynamics of the organization were also confusing to me, and I think a lot of other Cubs fans. I understood that Epstein was working to execute his plan to overhaul the team’s roster and farm system and was limited by a lack of financial resources from the business side of the operation.

And while I had questions at the time about where the pitching was going to come from to complement the franchise’s slew of young sluggers, I believed in Epstein. I just wanted to see his baseball role front and center, with the business division serving as the one in the background.

Then, by glorious happenstance, Joe Maddon became available. And soon after, Jon Lester became a Cub. And then Jake Arrieta became Bob Gibson as those young sluggers all began arriving in droves.

Today, Wrigley is still undergoing massive construction. There are still issues with some rooftop owners. And the Cubs’ TV broadcast future remains far from settled. But no longer is Crane Kenney the Cubs name that we read the most about. In fact, we now rarely hear his name at all.

And for baseball fans that’s a good thing, because while the Cubs will always be a business, they’ve returned to being a ball club foremost.