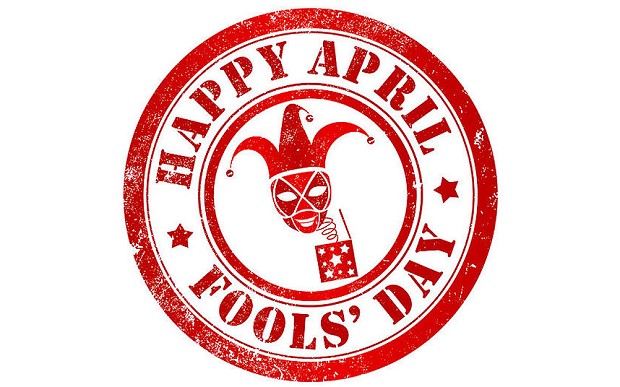 From the Saturday, April 2, editions of The Daily Journal (Kankakee, Ill.) and The Times (Ottawa, Ill.) …

When it comes to April, people have been fooling each other for at least six centuries. So don’t be embarrassed if you fell for one on Friday.

Well, you know, unless you should be.

As it turns out, the first recorded association between April 1 and foolishness dates all the way back to 1392 when Geoffrey Chaucer penned The Canterbury Tales. In one story, set “Syn March bigan tritty dayes and two” the vain rooster Chauntecleer is tricked by a fox.

Readers interpreted that line to mean “March 32nd,” i.e., April 1. But modern scholars believe there was a copying error from Chaucer’s original manuscripts and that he actually wrote “Syn March was gon,” meaning that the passage originally meant 32 days after March – i.e., May 2.

In honor of the pseudo-holiday just passed (it’s not a public one in any country), I wanted to share four of my favorite Chicago-related pranks over the years. Three of them took place on April 1, while the fourth simply came when time was ripe.

On April 1, 1992, airline passengers descending into Los Angeles International Airport were in for a shock if they peered out the window to see an 85-foot-long yellow banner on the ground featuring 20-foot-high red letters that read: “Welcome to Chicago.”

The sign, which was raised above the Hollywood Park race track about three miles from the airport, remained up for two day with track spokesman Brock Sheridan explaining, “It was something we always wanted to do. We thought it would be kind of funny.”

I’m sure it was, until the passengers realized they had to settle for L.A. hot dogs.

Pulling the wooly over your eyes

Six years before Michael Crichton published his book “Jurassic Park,” the April 1984 issue of MIT’s Technology Review featured an article entitled “Retrobreeding the Woolly Mammoth” that described efforts by Soviet scientists to bring the woolly mammoth back from extinction.

According to the piece, the Soviet team – led by a Dr. Sverbighooze Yasmilov – had taken DNA from mammoths found frozen in Siberian ice and inserted it into elephant cells. The mammoth embryos were then being brought to term inside surrogate elephant mothers.

The article included a slew of clues that it was a prank (including the comical name of the lead scientist, an accompanying cartoon and the April 1 dateline), but the Chicago Tribune still fell for it and weeks later reported story as real news, even sending it out via its news service. Several months after that, Family Weekly, a Sunday insert in 350 newspapers, also shared the fake story before later apologizing for its “mammoth mistake.”

In 2011, Chicago-based Groupon launched an entire website announcing that it had acquired the intellectual trademark to April Fools’ Day itself and would soon crack down on “patent offenders” trying to pull April 1 pranks without the company’s permission.

The site also included a fake patent application, a quiz to see if you’re an April Fool, a prank shop and a list of planned pranks for the next 20 years. Ironically, I now find it difficult to take many of Groupon’s daily deals seriously.

Last October, hours before the Cubs were set to take on the Pittsburgh Pirates in the National League Wild Card game at PNC Park, Chicago fan Steve Mpistolarides snuck into an office building across the street from the stadium and changed a sign reading “Let’s Go Bucs” (an alternate nickname for the Pirates) to “Let’s Go Cubs.”

The photo of the altered sign went viral and the Cubs emerged victorious. This year, I’m hoping the hyped Cubs don’t play us for fools.