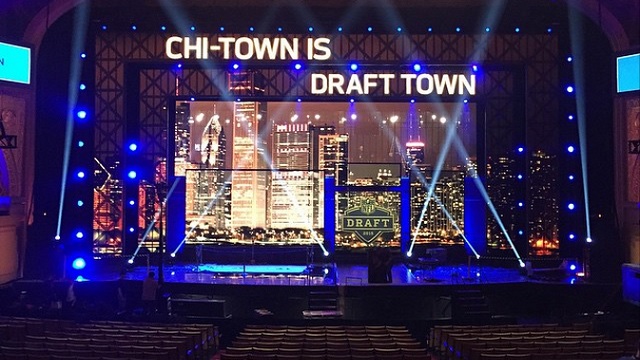 From the Saturday, April 23, editions of The Daily Journal (Kankakee, Ill.) and The Times (Ottawa, Ill.) …

After spending more than five decades in New York City, the NFL Draft migrated west to Chicago last spring and was such a hit – drawing upwards of 200,000 people to its Draft Town extravaganza across from Roosevelt University’s Auditorium Theatre in the Loop – that the league decided that it had to have a Windy City encore this year.

They’ve now made it even bigger and better than before, and if you’re considering a trip to Chicago to revel in all things NFL during the 2016 Draft this Thursday through Saturday (April 28-30), then here’s the playbook you need.

With 4,000 seats, Auditorium Theatre (50 E. Congress Parkway) has a limited capacity (and its tickets are already spoken for anyway). But across the way in adjacent Grant Park, Draft Town is open to the public and has plenty of room for everyone.

Covering 900,0000 square feet – equal to 15 football fields – the footprint for Draft Town isn’t larger than 2015, but the festival’s free slate of family-friendly activities and interactive exhibits is expected to be. This year, the focus shifts farther away from Michigan Avenue towards the lakefront with “Selection Square,” where representatives from all 32 teams will be seated to call in their picks, now encircling Buckingham Fountain.

That location will serve as the hub of the draft’s operations and feature seats for 1,000 additional fans (again, tickets no longer available) with the talking heads from ESPN and NFL Network also set up nearby.

On Thursday night, presumptive first-round picks will still enter Auditorium Theatre on a red carpet prior to the draft. Draft Town will be open to the public from noon to 10 p.m. on Thursday and Friday, and from 10 to 6 p.m. on Saturday.

For full access to all of the action at Draft Town, the NFL suggests downloading its Fan Mobile Pass (NFL.com/DraftApp), which is required to participate in several of the interactive exhibits.

Among them is the “Combine Corner,” where guests get a chance to try their hand (and feet) in some of the same competitions featured at the NFL Combine. You can test your vertical jump, run a down-and-out pass route and even clock your speed in the 40-yard-dash by racing alongside an LED screen that features video of some of the NFL’s fleet-footed stars.

Elsewhere, participants can test their ability to kick a field goal through NFL uprights (after watching last spring’s highly entertaining kickers, I can tell you it’s not easy). New this year on the Grant Park lawn will be a Ferris wheel – nicknamed the “1st Round Draft Wheel” – that provides a bird’s eye view of both Draft Town and the Chicago skyline.

Other attractions include the football clinics taught by NFL players and open to boys and girls ages 6-14 on a first-come, first-served basis, the NFL Draft Tavern by Bud Light, the Draft Town Tailgate featuring fare from some of the city’s best restaurants, an NFL Museum, replica AFC and NFC locker rooms and much more.

How to get there

From outside the city, the easiest route to Draft Town is probably via Metra to the Museum Campus/11th Street Station followed by walking north to Grant Park. If you do drive, underground garages are available beneath both Grant Park and Millennium Park but could fill up quickly. You might have better luck choosing to park in a high-rise garage located north of the Chicago River and then taking the CTA Red Line south to Jackson.

To make your plans, rtachicago.org is a valuable resource.