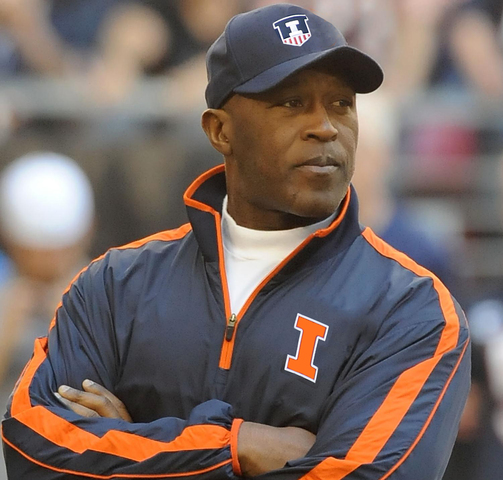 From the Saturday, Sept. 3, editions of The Daily Journal (Kankakee, Ill.) and The Times (Ottawa, Ill.) …

As you read this, I’m about 3,600 miles west of Illinois in Dublin (that’s Ireland, not Ohio) and depending on what time of the day you grab the paper or jump online, I’m likely enjoying a pint of Guinness before, during or after the Boston College-Georgia Tech football opener (that’s American, not European) held today at Dublin’s Aviva Stadium.

Since I’m cheering on my wife’s alma mater over in Ireland (“Go Eagles”) as part of my 40th birthday celebration, I won’t be in Champaign to celebrate the start of the Lovie Smith era at the University of Illinois.

But as luck would have it, I have plenty of thoughts about it.

Last December, when the University of Illinois decided to extend football coach Bill Cubit’s contract for two seasons, I was told by many an angry Illini fan on Twitter that the move was a catastrophe. It would kill recruiting, they howled. It would make the job toxic, they ranted.

Rather, it was my opinion that the short-term stability provided by Cubit’s contract clearly offered Illinois the best long-term options. For a program still reeling from the debacle named Tim Beckman, Illinois simply couldn’t afford another multi-year mistake by giving Cubit – or any other coach – a lengthy deal when the school still didn’t even have a permanent athletic director in place.

I believed that it was highly unlikely that the best possible coach would take the Illinois job without knowing whom his permanent AD was – and equally unlikely that the best possible Illinois AD candidate would want a job where he was stuck with a new long-term coach he didn’t hire. To avoid settling, I liked how the Cubit deal bought the Illini time to hire the right AD, rather than just an AD, which could then lead to the right coach.

To me, worrying about Cubit’s ability to recruit was small potatoes. I believed that the right coach wouldn’t stress out about a weak recruiting class or two. Rather, if he was right, he’d start fixing that.

Lovie already is, as Illinois last week beat out Utah and Pitt for Florida receiver Carmoni Green and then nabbed in-state standout Olalere Oladipo of Huntley, who turned down Michigan State and Penn State. Shortly before that, star offensive lineman Larry Boyd of St. Louis picked Illinois over Missouri, saying: “The key? Two words: Lovie Smith. I mean, there ain’t no other coach like him in any program … I wanted to be the one to say that I was here when we were winning championships with Lovie Smith.”

Patience is indeed a virtue – perhaps especially for the Illini.

To say that I’ve been a critic of former Illini coach Tim Beckman would be an understatement. But while I couldn’t stand the man’s coaching, I don’t hate him. He was in over his head in the Big Ten from the word “lasagna” and simply never should have been offered the job.

But if Beckman ever wants another one in football, he first needs to admit – both to himself and the public – that he made major mistakes at Illinois, and not just with his coaching but more importantly the treatment of players and handling their injuries.

Last week, before Beckman resigned as a volunteer assistant at North Carolina, Tar Heels coach Larry Fedora said he told him a story different than the one exposed through an independent investigation that preceded Beckman ouster at Illinois. That’s disappointing. Because until Beckman can honestly admit to himself and then others what he actually did wrong, there’s only place where he’s ever going to coach.