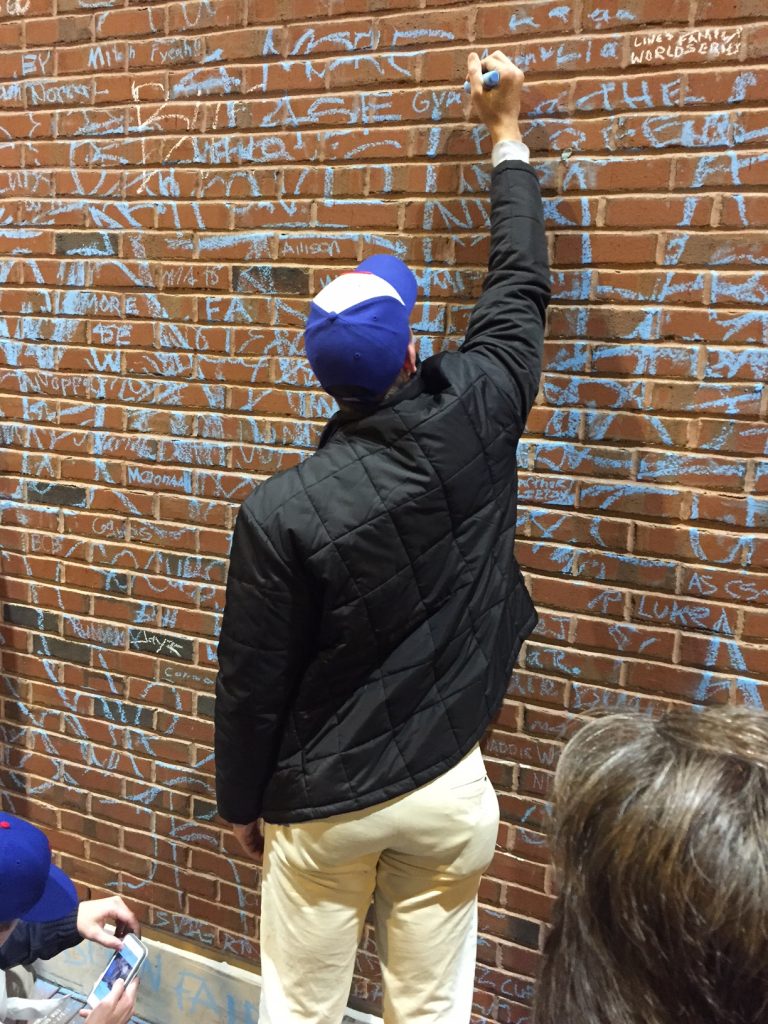 From the Saturday, Oct. 29, editions of The Daily Journal (Kankakee, Ill.) and The Times (Ottawa, Ill.) …

My 100-degree temperature returned to normal long ago, but I’m still dealing with a lingering cough this week.

So, I’m pretty sure that my Cubs Fever remains intact.

And, really, how could it not be, what with the North Siders sending spirits soaring by playing in their first World Series since 1945 … at Wrigley Field … on Halloween Weekend.

Talk about a scary good time.

Since I last checked in with some snapshots from Wrigleyville after the Cubs clinched the National League Division Series, I’ve seen plenty more transpire in Chicago. And here a few more tidbits to satisfy your appetite.

After all, they do say to starve a cold, but feed a fever, right?

As the World Series builds to a crescendo, the excitement is again continuing to mount throughout Cubs Nation. But if the team does win its first championship since 1908, I don’t think it can possibly be more emotional for me than it was seeing them reach the World Series for the first time since ‘45.

It may be just as emotional, but I don’t think it can be more so.

After all, I’ve spent my life watching the Cubs fail to reach the World Series, not fail in the World Series. While Boston fans suffered the heartbreak of seeing their Red Sox lose in the World Series in 1946, 1967, 1975 and 1986 after the Curse of the Bambino in 1918, Cubs fans were forced to watch the door slam in their faces before even reaching the Fall Classic.

In my 40 years, I saw the ground ball roll through Leon Durham’s legs in 1984, watched Greg Maddux’s and Andre Dawson’s vanishing act in 1989, and saw every tragic thing that unspooled during Games 6 and 7 of the 2003 NLCS, along with oodles of other painful postseason moments.

And that’s to say nothing about those who are old enough to have lived through the nightmare of 1969. No matter what happens in this World Series – and I’m feeling good about it – just reaching it was so incredibly special.

There is crying in baseball

Speaking of emotion, I’ve never seen so many grown men with tears in their eyes in one place than I did in the Wrigley Field bleachers after the final out of Game 6 – and that certainly included me and my brother John.

Heck, I still almost tear up just thinking about it a week later.

The funniest thing inside Wrigley Field after the Cubs clinched the pennant was the cheeky message the team flashed on the scoreboards: “17th Pennant in Club History.”

Hey, never mind that 16 of those came before World War I.

The coolest thing outside Wrigley Field after the Cubs clinched the pennant was along Sheffield Avenue, where exiting fans were given chalk by Cubs employees so they could write their own names and those of long-suffering loved ones all over the Wrigley bleachers exterior walls after the historic win.

It was such an incredible spontaneous display of fandom, which stayed up for only 12 hours before a crew power-washed the ballpark but will last forever.

On Facebook this week, my friend wrote, “I had a vision about a month ago that a team [the Cubs] were playing walked Kyle Schwarber and pitched to Javier Baez. Baez smirked and ripped a hit (I don’t know if it was a single or a home run). At the time I didn’t think much of it because Kyle was out for the year. Not only is he back, but the Cubs lineup has Baez following him.