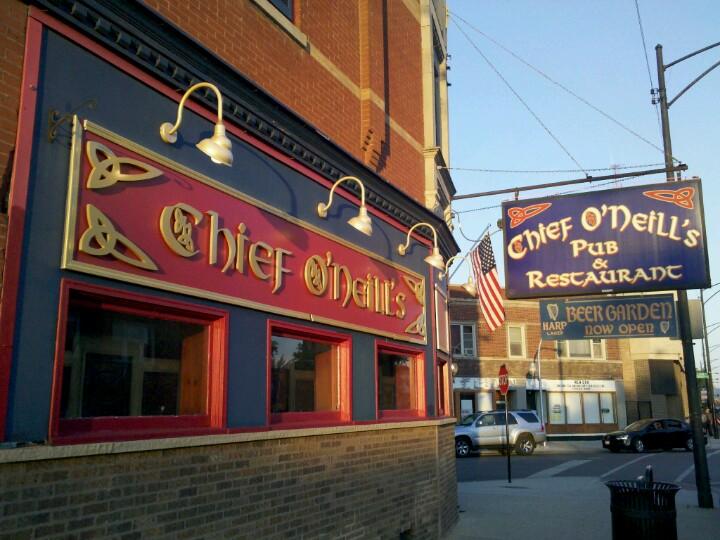 From the Saturday, March 18, editions of The Daily Journal (Kankakee, Ill.) and The Times (Ottawa, Ill.) …

It feels like we celebrated St. Patrick’s Day for a week.

Because, well, we did.

Chicago holds its annual St. Patrick’s Day festivities – parade, bagpipers, green river and whatnot – on the Saturday prior to the holiday. So, considering that March 17 fell on a Friday this year, city’s Irish eyes have been smiling since last weekend. We need some shuteye after that stretch.

But now that St. Patrick’s Day is finally over and every bar from River North to Wrigleyville has stopped pretending that it’s an “Irish” pub because its bartenders wore green and slung some pints of Guinness, you may be interested in knowing where you can get a truly authentic taste of Ireland in Chicago.

Arguably the nation’s most Irish city, with more than 200,000 citizens of Irish descent (the most of any ethnic group) and 12 Irish mayors (out of 55), there are a number of options. Here are some of the best.

Located in the Irving Park neighborhood at 4626 N. Knox Ave. on Chicago’s Northwest side, the Irish American Heritage Center describes its mission as “to nurture and strengthen Irish culture and heritage through programs emphasizing Irish music, literature, drama, traditional dancing, fine arts and the constructive contributions of the Irish and Irish-Americans.”

It’s about as close as you can get to experiencing the Emerald Isle without a plane ticket to Dublin. The center features a museum, school, archives, art gallery, library and theater group and is your destination if you want to learn more about the Irish heritage.

Perhaps the most authentically Irish – and intriguing – aspect of the Irish American Heritage center is The Fifth Province, a traditional Irish pub that’s also one of Chicago’s best-kept secrets.

Tucked away in the South Wing of the Heritage Center, the pub is completely hidden from plain view outside the building. It was built by the founders of the Heritage Center – stone masons, carpenters, woodworkers, tile masters and pipefitters – and feels like a tradesmen’s hangout that you’d find in Galway. It features the live music, food and beer to match.

Named after the General Superintendent of Chicago Police Department at the turn of the 20thcentury and renowned for its can’t-miss Sunday brunch, Chief O’Neill’s (3471 N. Elston Ave.) may be the best Irish pub in the city – especially during warm weather when its enormous garden patio is open for business.

The pub was founded by two Irish-born musicians and is an homage to O’Neill, a truly fascinating man who ran away from County Cork in Ireland to become a seafarer. After a shipwreck in the Pacific, he was rescued and brought to San Francisco before becoming a Montana rancher and ultimately landing in Chicago as a policeman. Following his retirement in 1905, O’Neill — a talented flutist — dedicated his life to keeping the traditional music of his homeland alive by collecting and publishing more than 2,000 tunes.

Chicago’s South Side has long been associated with the Irish, and Shinnick’s Pub (3758 S. Union Ave.) has been a neighborhood staple in Bridgeport since 1938 — opening for business the day that Prohibition ended.

Irish to its core, the bar has been run by three generations of the Shinnick family and is a popular watering hole for White Sox fans with its proximity near Guaranteed Rate Stadium.