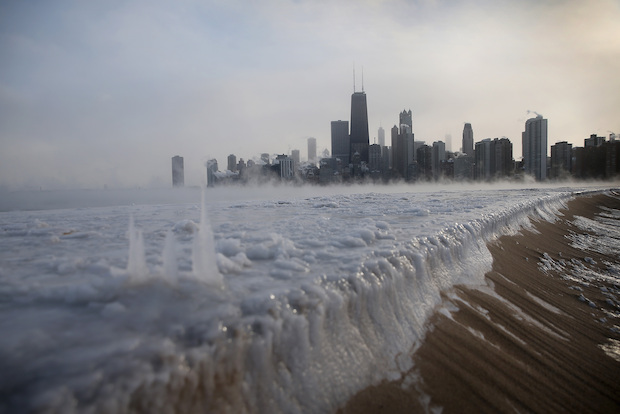 From the Saturday, Jan. 13, editions of The Daily Journal (Kankakee, Ill.) and The Times (Ottawa, Ill.) …

Four years ago, statistician Nate Silver attempted to rank the most “unpredictable” weather cities in America by comparing the daily conditions of 120 municipalities to their long-range averages.

What his research found was that Rapid City, S.D., is supposedly the most unpredictable weather city in the country, while Chicago rates a mere 58th – 42 spots behind Springfield, Ill., of all places.

Now, I don’t know that Chicago’s weather is so much unpredictable – it gets cold in the winter and hot in the summer – as it is volatile.  That, it most certainly has been the past few weeks when the Windy City (and the rest of Illinois) fell into a prolonged deep freeze, only to be followed by a near-record warm-up this week that spiked into the upper 50s.

With the chill now back, I thought I’d try to warm your cold, cold hearts with a lighthearted look at the weather that was (and, well, is again).

From Dec. 26 through Jan. 6, the mercury in Chicago never escaped the teens, with the high on many days registering only in single digits, and on some not even that. That frigid 12-day run tied the record for the city’s longest stretch below 20 degrees, which occurred only twice before – in 1936 and 1895.

New Year’s Day in Chicago did set a record with a high of only 1 degree and, according to WGN-Ch. 9 meteorologist Tom Skilling, the period of Jan. 1 through Jan. 5 was the city’s fourth coldest on record with an average temperature of just 3.6 degrees, a level more than 20 degrees below normal.

I think the only thing colder this winter is Major League Baseball’s so-called Hot Stove League.

You know the numbers, but how cold did it really feel last week?

So cold that even Chicago’s rats were freezing to death.

The Sun-Times interviewed several Chicagoans who that encountered frozen rodents – normally a terribly resilient bunch – along streets and in alleys.

Wicker Park resident Tyler Thompson, 28, said that he found a dead rat outside his apartment’s stairwell and used a broom to place it in a trash bin.

“Now that I think of it,” he said, “he deserved a more proper burial.”

Yeah, you won’t think so in the summertime, Tyler.

Snow has certainly been known to shut things down in Chicago – hello, Snowmageddon 2011 – but rarely does the mere cold cancel events.

That’s already changed this year, though, as on New Year’s Day the annual Polar Plunge into Lake Michigan at North Avenue Beach was called off because of the cold. As of 7:59 a.m. that morning, the mercury bottomed out at minus-9 degrees, a single degree away from the record low set in 1969.

Up in Lake County, however, the 19th Annual Waukegan Polar Bear Plunge went on as planned, perhaps proving that its citizens are a hardier bunch.

Nobody in Chicago dove into the lake on Jan. 1, but 400 people did run near it during a Lincoln Park 5K race to benefit Hope for the Day, a charity working to reduce suicide.

But just because people got out and ran doesn’t mean they were happy about it. The Tribune reported that when organizers announced there were still two minutes before the start of the race, the crowd let out a collective groan.

The cold in Chicago was so extreme last week that it caused one of the fancy glass panels at the new Apple Store along Michigan Avenue to crack.

No word on whether Apple Care covers that.