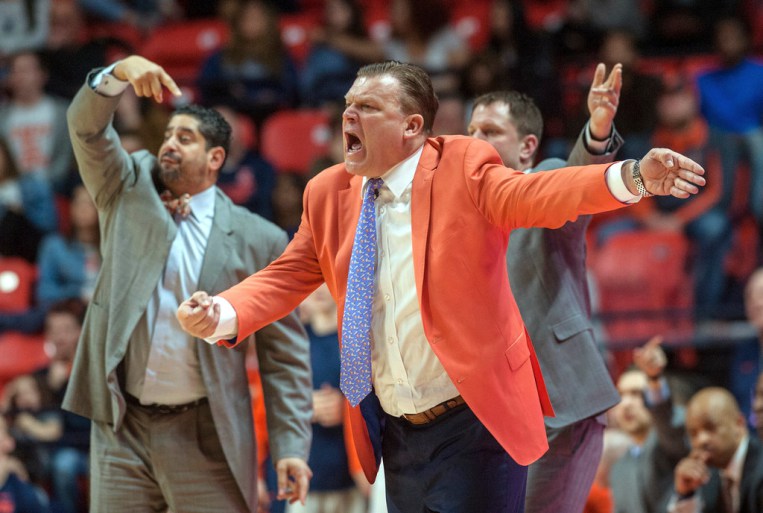 From the Saturday, March 10, editions of The Daily Journal (Kankakee, Ill.) and The Times (Ottawa, Ill.) …

Much of Illini Nation finds itself in a fix.

And after dealing with both, well … could someone fix me a drink?

Last week, first-year Illinois coach Brad Underwood wrapped up his debut season in Champaign with an underwhelming 14-18 record and a first-round exit in the Big Ten Tournament that resulted in a fifth consecutive year without an NCAA Tournament appearance for the once-proud program. Five days later, once-ballyhooed freshman guard Mark Smith – the state’s 2017 Mr. Basketball winner, who Underwood once compared to Jason Kidd – announced that he would transfer,

For the most combustible of Illini fans, that one-two punch was too much, causing them to lose their minds on social media. While sharing my thoughts on Twitter this week about Illini hoops, I was bombarded with tweets that ranged from utter despair (“There’s no reason for hope”) to utter lunacy (“Underwood is the worst coach I’ve seen at Illinois”).

While plenty of Illini fans remain plenty rational about what it actually takes to rebuild a basketball program, there’s also an orchard of bad apples who were frothing so badly at the mouth that buddy who’s a die-hard Indiana basketball fan shot me a text. It read: “Your fan base on Twitter is insane. This Illinois team played hard than I can remember an Illinois team playing in the last I-don’t-know-how-many years.”

And, hey, if anyone knows insanity, it’s Hoosiers fans.

The truth is that some Illini fans simply don’t have the stomach for program overhauls (basketball or football). And that’s what we’re currently in the midst of in Champaign, where the triumvirate of former athletic director Mike Thomas, football coach Tim Beckman and basketball coach John Groce took programs already in a hole and created a crater. Digging out from that doesn’t happen overnight, and it can be messy.

It was this season for Underwood as his Illini started 0-8 in the Big Ten and finished 4-14. While the Illini were competitive in almost every game and indeed played hard, the roster that Underwood inherited lacked the type of athleticism and playmaking skills that he needs for his fast-paced system.

Smith didn’t at all live up to his hype, appearing to be a step slow against top-level competition. On the flipside, freshman guard Trent Frazier turned in a brilliant rookie campaign and looked like the player that Smith was supposed to be. And while I’m sure that Underwood could have adapted his system to better fit his personnel, he didn’t. I liked that because it showed that he wants to build the program and culture that he wants rather than stick a Band-Aid on things.

If guys don’t want to be part of the fiery Underwood’s program or simply aren’t a fit for it (which Smith claimed as his reason for leaving), well, then they aren’t. Other players may also transfer this offseason, while Underwood will be adding new faces as he remakes the team in his image.

As for Illini fans antsy for success, I get your frustration. But you should be asking yourself just one question right now: “Do you think Brad Underwood is a good coach?” If the answer is, yes, then let him do his thing and build a program. If the answer is no, well, then you’re going to have to be patient too.

Because, Brad Underwood isn’t going anywhere any time soon. And as his journey plays out with its inevitable ups and downs, it’s wise to remember that he wasn’t hired to just repair a team, but to rebuild a program.

Fix yourself on that.