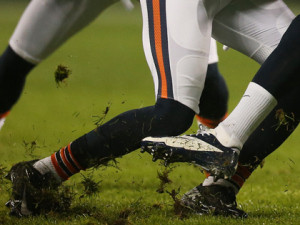 (CBS) Well, it’s that time of the year again.

Time to gripe about the state of Soldier Field’s turf. Time to groan about how the Chicago Bears have not – and seemingly will not – replace the stadium’s natural grass surface with a synthetic one. And time to ask once again if the team will reconsider their position on the issue.

Because it seems all wet to me.

On Sunday night, as the rain poured down at Soldier Field, the Bears and the Texans slipped and slogged their way to a 13-6 final score as ugly as an offensive lineman’s backside. Now, of course, there’s nothing that can be done about a rainstorm in Chicago – you know, without a retractable roof facility (don’t get me started) – but plenty can be done to give the players better footing at Soldier Field, no matter the Windy City elements.

And I’m not the only one who thinks so.

In January 2011, as complaints about Soldier Field’s slippery sod were running roughshod about town, Bears quarterback Jay Cutler and linebacker Brian Urlacher both chimed in, calling their home field “one of the worst in the league” and its footing “horrible.”

The criticisms prompted Soldier Field general manager Tim Lefebvre to go on the radio to counter that he would be fine with installing synthetic turf at the stadium. But it’s the Bears who aren’t.