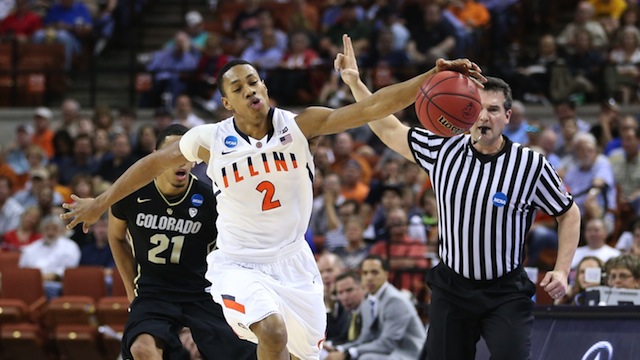 (CBS) Last season was a pleasant surprise. Next season looks to be promising. But what exactly would you call this season for the University of Illinois basketball team?

A mystery, I suppose.

Although, by March, I still suspect that the Illini’s 2013-14 campaign could turn out to be a solid whodunit, again filled with some unexpected twists. That’s even though Illinois’ immediate fortunes took a turn for the worse on Tuesday when the NCAA announced that it had ruled Oregon State transfer Ahmad Starks ineligible for this season.

The 5-foot-9 Whitney Young product, who spent three years as a starter at guard for the Beavers, transferred to Illinois to be closer to his ailing grandmother in Chicago and had applied for a hardship waiver to be eligible immediately.

“I thought his case was very, very valid,” Illini coach John Groce said on Wednesday. “We were really disappointed.”

Fans should be too, considering how Starks, who averaged 10.4 points per game and shot 40 percent on three-pointers as a junior last season, was expected to be an immediate key backcourt contributor for Illinois. To be sure, his loss is a blow for the team, but I don’t think it sinks the Illini’s season.