From the Saturday, Aug. 9, editions of The Daily Journal (Kankakee, Ill.) and The Times (Ottawa, Ill.) … 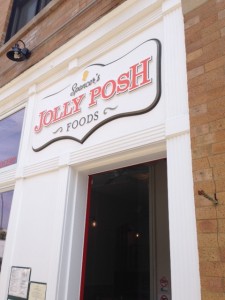 , the cheapest round-trip flight I could find online from Chicago to London would have set me back about $2,500.

Instead, I found walking to Southport Avenue in Chicago’s Lakeview neighborhood to be much more economical – and nearly as British.

Now fully settled into its new location at 3755 N. Southport Ave. a few blocks south of where it originally opened in 2012, Spencer’s Jolly Posh is a British and Irish grocer and café that’s unlike any other establishment in Chicago – and about as close as you can come to enjoying Jolly Old England without actually traveling across the pond.

“The other location was something we fit ourselves into,” Jolly Posh’s British proprietor Nick Spencer, 36, told me on Wednesday while comparing his original shop on Irving Park Road to the larger one he moved into earlier this summer. “With this place, we were able to design it to fit what we want.”

And as the Brits might say, it’s a proper fit. Not to mention, a delightfully unique and delicious one.

Seven years ago, Spencer moved from England to New York for love. In 2009, after marriage, he and his wife relocated to Chicago to be closer to her family. Looking to change careers upon his arrival (he had previously worked in risk management consulting), Spencer was struck by a desire to provide Chicagoans – and ex-pats from the UK – with authentic British meats, goods and experiences (such as a regal afternoon tea) that were difficult, if not impossible, to find in the Windy City.

On Wednesday, when I popped in for lunch, Jolly Posh was bustling with patrons looking to eat, shop or simply peruse shelves filled with curious groceries unfamiliar to most Americans. I’m not certain where else one can find brands such as Ben Shaw’s dandelion and burdock soda, Jammie Dodgers cookies, Ribena blackcurrant juice boxes and Mega Monster Munch pickled onion-flavored corn snacks, but you can find them at Spencer’s Jolly Posh along with scores of other edible curiosities.

After taking a seat at one of the café’s tables, I scanned a menu offering entrees such as “The Earl’s Sandwich” (featuring medium-rare roast beef), the “Jolly Posh BLT” (with English back bacon, which is cut much thicker than American bacon) and “The Highlander” (Scottish smoked salmon sandwich), as well as variety of salads and sides.
Earlier this summer, Jolly Posh began offering a dinner menu, which Spencer called “a work in progress” while adding, “but I’m really happy with where we now are with lunch and the grocery.”

For my own lunch, I happily settled on a “Cheeky Coronation Chicken Curry” sandwich, billed as “A British ’80s Classic” complete with mango chutney, red onions and fresh arugla. To wash it down, I requested a pint of Magner’s Original Irish Cider (with ice, as it’s meant to be served).

As I waited for my order, I admired the shop’s many British details such as a sign reading “This way to the loos,” a stack of Union Jack doormats for sale, and the London “Underground” subway logo slapped on a door that leads, well, underground to the basement.

Once my cold sandwich on a warm toasted roll arrived along with my cider, the tasty food, sweet drink and foreign décor left me almost imagining that I was sitting in a London pub, minus the fog outside.

So enamored was I with that notion, that I proceeded to purchase a four-pack of Greene King Abbot Ale, upon Spencer’s suggestion, to continue the English experience later at home. And like Jolly Posh itself, it didn’t disappoint.