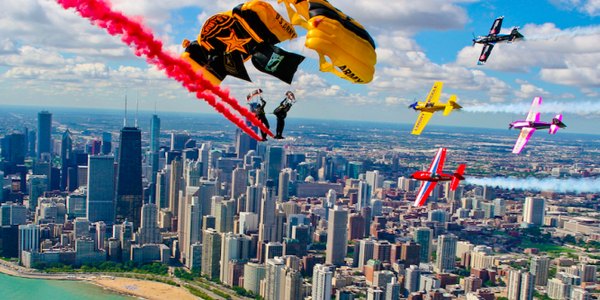 From the Saturday, July 30, editions of The Daily Journal (Kankakee, Ill.) and The Times (Ottawa, Ill.) …

When it comes to the calendar, August is an oddball.

It’s the only month of the 12 that’s without an official holiday, which probably gives it a complex. Thankfully, though, Chicago offers plenty of events to keep August – and you – plenty busy.

So, holidays or not, here are a few of the events in that you can consider partaking in next month.

The fest features hot dog vendors including Byron’s and Fatso’s Last Stand, along with live music, entertainment and speaking sessions.

Now into its second third decade, Retro on Roscoe offers its annual automotive and musical blasts from the past along a tree-lined, six-block stretch of Roscoe Village, one of

Chicago’s coziest and most underrated neighborhoods.

Featuring artisans, vendors, merchants, kids’ activities and the city’s best cover bands, including Sixteen Candles, Too White Crew, Wedding Banned and Rod Tuffcurls & The Bench Press, Retro on Roscoe is held from 5 to 10 p.m. on Aug. 12 and noon to 10 p.m. on Aug. 13-14.

Just outside the festival’s entrance at Damen and Roscoe, you’ll find the star of the show: more than 50 classic and muscle cards on display.

Back in 1929, Chicago Defender newspaper founder Robert S. Abbott conjured up Bud Billiken, a character named after the Billiken, which is the guardian angel of all children, according to Chinese legend

Abbott proceeded to launch a parade named after his brainchild, which has grown over the decades to become a fixture in Chicago’s African-American community.

Focused on a “Back to School” theme, the Bud Billiken Parade is the second largest in the nation and kicks off this year at 10 a.m. on Aug. 13 at Martin Luther King Drive and Oakwood Boulevard in the city’s Bronzeville neighborhood and continues south to 55th Street at Washington Park, which serves as the site of a celebratory picnic

If you have a passion for tracking down virtual creatures and craft beers, well, then Wicker Park is where you want to be on Aug. 13.

An organization named MyDrinkOn.com is staging a Pub Crawl from 2 to 8 p.m. that starts at Nick’s Beer Garden (1516 N Milwaukee Ave) and leads through three other participating neighborhood watering holes.

There’s no cover charge to enter the bars, and a $20 admission includes two drinks, access to additional drink specials and entry into the Pokemon Scavenger Photo Hunt.

A Chicago lakefront fixture since 1959, the Air & Water Show returns Aug. 20-21 featuring the fan favorite U.S. Navy Blue Angels and, new this year, the F-35 Heritage Flight, along with plenty of other daredevils.

The show is held each day from 10 a.m. to 3 p.m. just off of North Avenue Beach. If you attend, I suggest parking at the Piper’s Alley pay garage on North Avenue just west of Wells Street and walking to the beach to nab a spot near Castaways Bar & Grill, site of the show’s announcer.